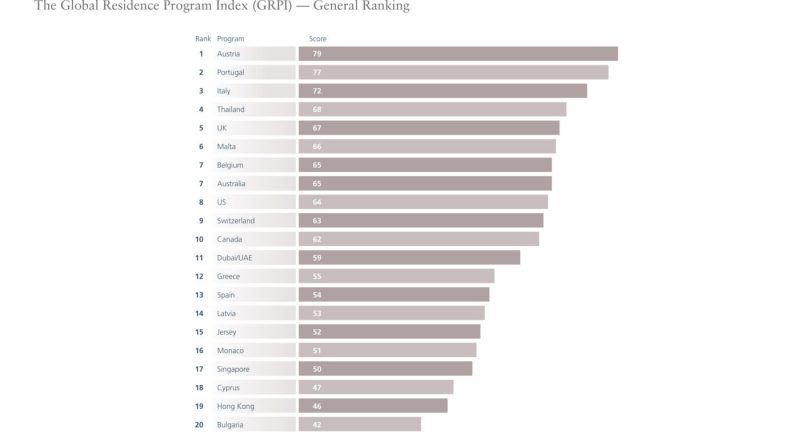 According to a company press release, the world’s RCBI-programs “were evaluated by a distinguished panel of independent experts — including immigration and citizenship lawyers, economists, sovereign risk experts, and academic researchers — who took into account a broad range of factors pertaining to each program. The result is a global bird’s-eye view of the investment migration industry and a ranking of all the major programs on offer in both the residence and the citizenship sector.”

At 79 points out of a possible 100, Malta citizenship program, the MIIP, remains primus inter pares, seven points ahead of its closest rival, Cyprus.

At the very bottom of the index those countries that had no visa-free access to the Schengen countries.

Heading the list of residence by investment programs is a rarely discussed central-European solution.

“Boasting a score of 79 out of 100, the Austria Private Residence Program has emerged as the world’s best residence-by-investment program, knocking Portugal off the top spot for the first time since the Global Residence and Citizenship Programs publication was launched in 2015. Now in 2nd place, Portugal has a score of 77, while newcomer Italy has claimed 3rd place, scoring 72.”

Several extremely popular residence programs received a lower rank due to their non-EU status (soon to be, in the UK’s case).

See the detailed scores of each program in the gallery below.