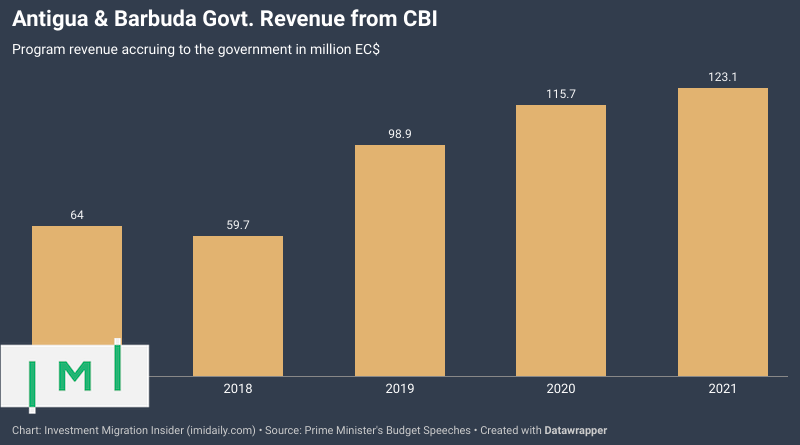 In his budget speech to Parliament yesterday, Antigua & Barbuda Prime Minister Gaston Browne revealed his country’s citizenship by investment program had received 498 applications during 2021, sharply up from the 366 recorded during 2020 and a slight improvement on the 472 applications recorded in the last year before the pandemic.

The Prime Minister also revealed the program had raised government revenues amounting to EC$123.1 million, or about US$46 million, during 2021, up from EC$115.7 million in 2020. The figures encompass only those CBI-related revenues that accrue to the government; investments in privately owned real estate developments are not counted.

“From the inception of CIP in Antigua and Barbuda in 2013, revenues have contributed handsomely to the social and economic development of our country,” said PM Browne, according to Caribbean News Global. “All its transactions have been an open book, with everyone able to track its income and expenditures in a system of public disclosure.”

The PM's statements as to his program's transparency notwithstanding, IMI notes that the country's Citizenship by Investment Unit, which is tasked with - among other obligations - publishing detailed program statistics twice a year, has not released any statistics since those covering the first half of 2020, and no detailed statistical reports since 2019, despite IMI's repeated requests for the same.

Since the program's opening in 2013, nine out of ten program participants have qualified through a contribution to the National Development Fund, the PM disclosed, while the remainder invested in either real estate or local businesses.

Because of the absence of detailed statistics in the last two years, IMI is unable to report the share of program participants that opted for real estate investment in 2020 and 2021. By the end of 2019, however, the last year for which we have detailed data, the NDF option's historical overall share of the program stood at 80%. That it now stands at almost 89.5% indicates hardly any of the program's participants are making investments in real estate or businesses any more.