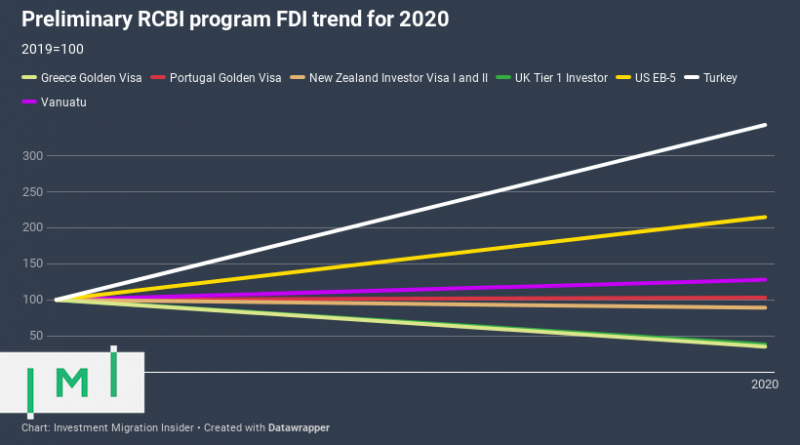 Ten programs alone raised nearly ten billion dollars last year, the most recent figures show. Though 2020 is unlikely to be a record year for the market as a whole, a handful of programs are hitting all-time highs during the height of the pandemic.

Where no exact revenue figures are published, estimated investment volumes are a function of reported application approval numbers and average investment amounts. This is the case for

We have excluded from comparison those programs where data is insufficient or where investment volumes are very small.

For ease of comparison, we’ve converted all figures to US$ terms.

The 10 highest-grossing programs in 2019 were

Contours of 2020
Much excitement will no doubt be tied to these programs’ performance in 2020. For several programs – those that report data frequently and regularly – we already have numbers covering the first half of the year and, in some cases, even more recent data.

To enable comparison of investment volume trends in 2020 among programs that report data along different schedules, we are displaying program performance on an average per-month investment basis.

In the below graph, we’ve set 2019 as the index year at 100 so as to show how each program is performing so far this year compared to itself in 2019.

Turkey CIP
Turkey’s CIP has gone from strength to strength since lowering its investment requirement from US$1m to US$250,000 in September 2018, most recently reporting that it was raising US$17 million a day. Total FDI in the program in 2019 was greater than the preceding year by a factor of 13 (!).

US EB-5
The US EB-5 program recorded one of its best-ever quarters in Q1 of FY2020, logging 4,264 I-526 filings, which, assuming 90% acceptance rates, would imply it raised nearly two billion dollars in a single quarter. Such lofty volumes, however, were a reflection of the program’s impending price increase to (minimum) US$900,000, which together with COVID-closures, explains why only 21 investors filed I-526 petitions in Q2, the lowest such number on record. Note that the US fiscal year begins on October 1st, which means that the brunt of the pandemic impact will only be reflected in the data in Q3 of FY2020.

UK Tier 1 Investor
The UK’s Tier 1 program had a statistically ordinary first quarter but approved only 23 applications in Q2, an 11-year low, due to closed borders and reduced Home Office capacity.

New Zealand Investor Visa
New Zealand’s investor visas (categories I and II) ended their FY2019-2020 only slightly down compared to FY’18-’19. But because Wellington’s fiscal year runs from July 1st to June 30th, the NZ IV’s trajectory in our graph looks more favorable than it would have if figures from the calendar year 2020 were considered in isolation.

The Greek golden visa
Like the English, the Greeks have seen their investor visa approval volume hampered by border and office closures. A series of mitigative measures have come online during the summer, notably aiming to enable remote-application, which should drive a rebound in Q3 and Q4.

The Portuguese golden visa
Portugal’s golden visa had a rough February, March, and April 2020 but came back with redoubled force in May (its best-ever month) and June (second-best) and is actually on track for a statistically better-than-normal year.

Vanuatu VDSP and VCP
The first half of 2020 has been the highest-grossing six months on record for citizenship by investment in Vanuatu. Having remained officially COVID-free has certainly served to boost the country’s image in recent months, but note that the country’s CBI-related revenues have been on an upward trajectory since 2016.