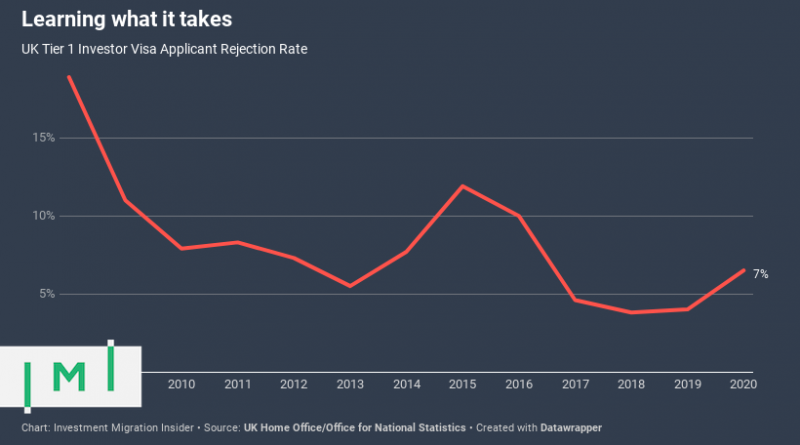 Not since Q3 2008 has the Home Office approved fewer applications for Tier 1 investor visas in the UK. In the three months to June 30th, 2020, only 23 main applicants and 40 dependents received Tier 1 investor visas, largely due to COVID-related border closures and service suspensions. The 23 main applicants in the first quarter consisted of nine Hongkongers, eight Chinese, four Russians, one Qatari, and one Taiwanese.

The numbers imply that the UK raised GBP 46 million during the period, down by half from the preceding quarter, a nine-year nadir in terms of revenue.

The Home Office did not reject any applicants during the quarter, confirming a multi-year trend of falling rates of refusal. While declines have averaged 4.7% in the last four years, the spread between applicant nationalities is distinct; Among the top 15 application source countries, rejections rates vary widely, from 0% among Brazilians (73 applications) to 27% among Iranians (69 applications). Perhaps no acceptance rate is more admirable than that of the Americans who, while coming in third overall in the number of applications since 2008 (235 main applicants) have received but a single refusal.

“While not shown in today’s data release, we have seen a significant increase in interest from Americans wishing to migrate to the UK under the Investor category,” says Farzin Yazdi, Head of Investor Visa at Shard Capital, who added that he expects this trend to be reflected only in Q4 and Q1 next year.

His colleague, Rafael Steinmetz Leffa, Head of the same firm’s China Desk, indicated that, contrary to what many industry peers believe, he expects the number of Hong Kong applicants to “remain steady and neither spike nor plummet”, also pointing out that Q2 marks the first-ever quarter during which Hongkongers outnumber mainland Chinese investors.

“Several recent reports of a record number of property acquisitions in the UK from investors from [Hong Kong] are perfectly understandable,” added Leffa, who highlights that there’s been” a record number of overseas property shows in Hong Kong, and the UK government has made efforts to make the market more attractive with the Stamp Duty cut.”

Malaysia To Exempt Existing MM2H Participants From Most New Rules

Following fervent feedback from stakeholders, Malaysia decides to grandfather in existing MM2Hers under the old rules, with two exceptions.

October 5, 2021 Christian Henrik Nesheim Comments Off on Malta to Share Information on MEIN-Investors With Tax Authorities in Countries of Origin

Malta will actively inform the applicant’s original tax jurisdiction that the individual has naturalized in Malta through the MEIN policy.