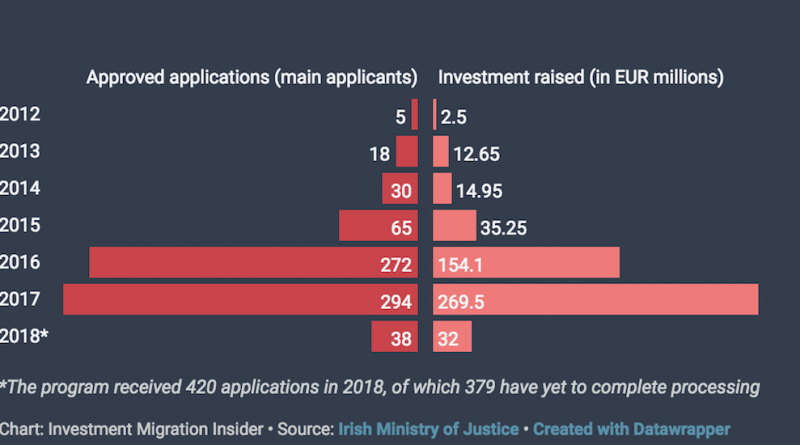 Preliminary figures show 2018 is on track to become a record year for the program; Investors filed 420 applications, 379 have yet to complete processing.

Responding to questions about the Irish Immigrant Investor Program (IIIP) in Parliament this month, Minister of Justice and Equality – Charles Flanagan – revealed application data going back to 2014 that showed the Emerald Isle’s golden visa had raised well in excess of half a billion euros since opening in 2012.

Supplementing this most recent data set with Q3 2017’s interim report on the program, we’ve been able to obtain a complete set of statistics for the program going back to its inception. The numbers tell a story of a slow start – only 25 investors applied in the program’s two first years – but, following a rapid expansion in 2016, application volumes have seen new records set each year since.

Investors overwhelmingly hailed from China, at least in the period for which the Justice Ministry has published data – 2012-2017 – accounting for some 91% of all applicants. A very distant second, Americans made up about on in fifty program participants.

81% of would-be residents applied under the Enterprise Investment option, although that asset class accounted for 74% of approved applications, indicating a greater risk of rejection for this investment type. In a significant minority of instances, approved investors chose the Endowment (9%) and Mixed investment options (11%).