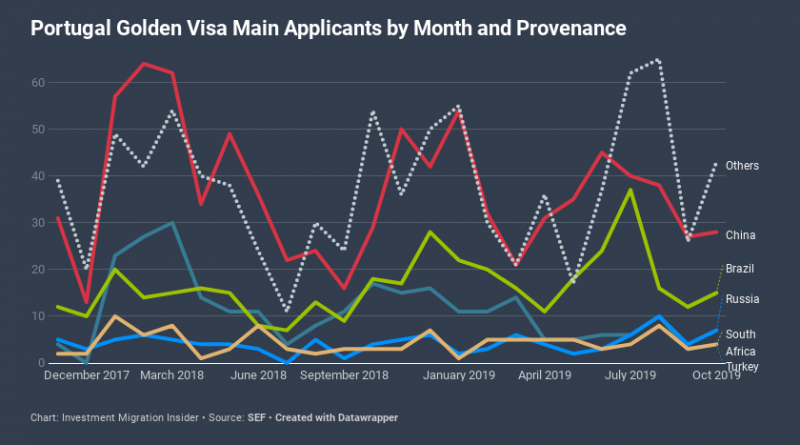 Portugal’s golden visa is just EUR 89 million away from passing the 5-billion-euro mark. The champagne-opening could take place as soon as next month.

So far this year, 1,099 main applicants and 1,941 of their family members have received residence permits in Portugal under the program, a number largely in line with historical trends.

Overall investment in the program grew by 24% month-on-month in October, to some EUR 60 million. The proportionality between the capital transfer and property acquisition options returned to normal levels; a ratio of one to nine.

With 28 new investors, Chinese participants continued to lead the way, with Brazilians not far behind at 15. Russian investors accounted for seven spots, while South Africans and Turks took four each.

Between the beginning of the year and the end of October, program participants had injected EUR 661.5 million, or an average of EUR 66.15 per month. Extrapolating that average to the end of the year, Portugal would see its program raise just shy of EUR 800 million. Note, however, that approval and investment volumes have historically been stronger in November and December than in the summer months; a sprint during the final lap of 2019 may still help the program set a new record.

All told, the program has raised EUR 4.9 billion since opening in November 2012, the overwhelming preponderance of which came in the form of real estate investments. While this distribution has remained virtually constant throughout the program’s history, the increasing promotion of alternative qualifying asset classes – such as private equity and venture capital investment funds, which have lower minimum investment requirements – have the potential to disrupt this pattern.

Want to know more about the Portugal Golden Visa? To see recent articles, statistics, official links, and more, visit its Program Page. To see which firms can assist with applications to the program, visit the Residence & Citizenship by Investment Company Directory.