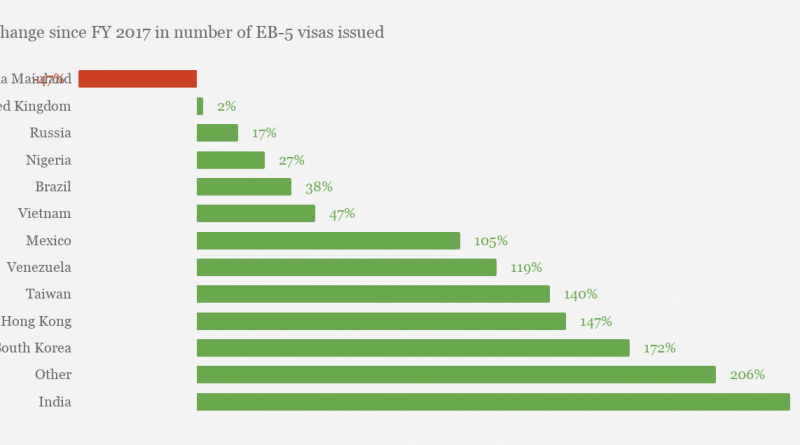 The effects of 15-year wait times and a growing interest in European alternatives are starting to manifest in Chinese application volumes for the US EB-5 program. Figures for the fiscal year 2018 show the share of EB-5 visas issued to Chinese nationals has fallen to just 42%, down from 75% the year before.

Not since 2008 has the proportion of EB-5 visas going to Chinese-born investors been lower. See the animated graph below for an illustration.

The share of applicants born in other countries, meanwhile, is picking up rapidly; The number of Indians receiving conditional green cards grew by an astonishing 236%, while that of South Koreans, Hong Kongers, Taiwanese, Venezuelans, and Mexicans all more than doubled.

“The major story in the FY2018 report is the increase in EB-5 visas issued to applicants born outside of mainland China,” writes EB-5 expert Suzanne Lazicki on her blog.

She also explains that the fall in EB-5 visas issued to Chinese “does not primarily reflect decreasing demand from China (China still dominates the backlog), but increasing demand from other countries that decrease the number of visas available to China.”

More on the EB-5 program: