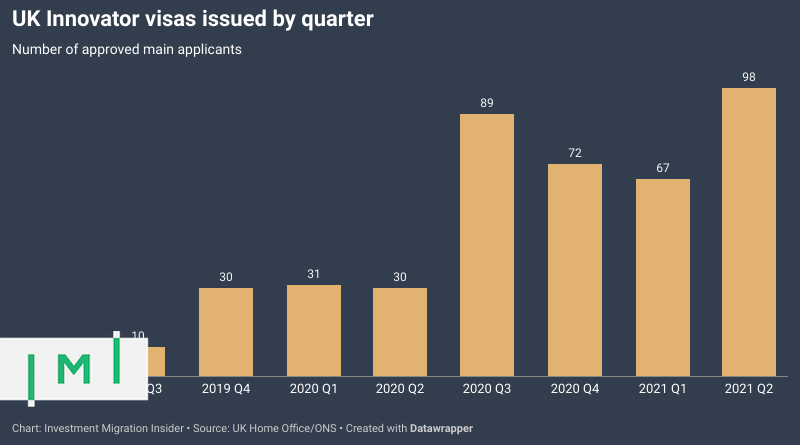 The British Home Office approved the UK Tier 1 Investor Visa applications of 66 investors and 117 of their dependents in the second quarter of this year, according to Home Office/ONS statistics released today. The figures represent a steep improvement on Q1, when 45 main applicants received their investor visas, and a 187% increase on the same quarter a year ago.

The 66 approved main applicants imply total capital injected into the UK economy through the program amounted to a minimum of GBP 132 million during April, May, and June this year, and aggregate investments of at least GBP 222 million year-to-date.

Indicating he was content with the quarterly results, Shard Capital Investor Visa's Farzin Yazdi called it an "impressive opening", referring to the UK's lifting of COVID-related restrictions, which only began in mid-to-late Q2.

Hinting at even better times ahead, Yazdi said his team had "seen a doubling in the number of inquiries for investor visas over the past two months," and that "given the lead times, these inquiries will filter through to the Home Office statistics in the following two quarters."

Chinese investors accounted for about one in four applicants in Q2, followed by investors from Hong Kong (11% of the total), Russia (9%), and the United States (8%).

One of the clearest investment migration market trends to emerge in the wake of the pandemic is the rise of interest from rich countries, notably the United States. American applicants have risen to become a top-five nationality among the applicants in many of the most popular IM programs, including in Portugal, Saint Lucia, Thailand, as well as in the UK.

"For over a year, we have highlighted the trend of increasing investment migration from developed nations such as the United States," said Yazdi. "This trend is continuing to gather pace."

He also pointed to a post-Brexit "first" worth noting: The UK, in Q2, approved its first Investor Visa for an EU citizen, a Hungarian national.

Record quarter for the Innovator Visa

The Innovator Visa category - which, together with the Startup visa, replaced the erstwhile Entrepreneur category in early 2019 - saw approvals reach an all-time high of 98 in Q2. It was a good quarter also for the Startup visa, which saw 115 approvals.

"The record number of applications in the last quarter under the Innovator Visa category, since its transition from the Entrepreneur Visa, is a strong indicator that the changes implemented by the Home Office have led to a healthy and sustainable program," commented Alex Hopkin, Head of Innovisa and Strategic Director at Latitude.

"I’m optimistic that we will finish the year off strong, especially with the introduction of the Innovisa platform, which is matching foreign capital and human talent with innovative British start-ups."

So far, the nationality distributions of visa-recipients in both the Innovator and Startup categories largely mirror that of the Investor visa's, though with more of an emphasis on applicants from the Indian subcontinent.

Discrepancies are more pronounced, however, in terms of rejection rates. The Innovator visa has suffered the highest rejection rates among the three categories in all but two of the last nine quarters, while Startup visa applicants appear to have the best chances of approval.

"Refusals in the Investor Visa category are typically low because applicants must go through several stringent checks prior to applying," said Yazdi, who also points out. "Do-it-yourself applications always end in disaster from what I have seen and heard."