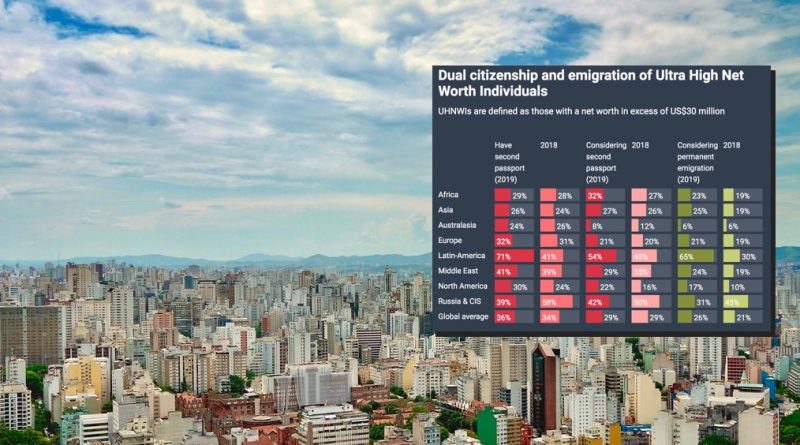 A long-time reader and investment migration professional raised a not uncommon query over a cup of coffee last week;

Latin-America has plenty of HNWIs as well as many of the common push factors that tend to motivate demand for residence and citizenship by investment programs.

Why, then, does Latin America not have a bigger investment migration market?

I’ll answer this question by comparing it to “developing” Southeast Asia (that is, the ASEAN countries less Singapore), a prominent and quickly-rising investment migration market that has roughly the same population as Latin- America (some 650 million people).

According to Knight Frank’s 2019 Wealth Report, LatAm has about three times as many millionaires as developing Southeast Asia – some 600,000 at last count. All else being equal, LatAm should, therefore, have about triple the Southeast Asian demand for residence and citizenship by investment.

Latin-America also has far higher rates of crime, violent or otherwise, than Southeast Asia, another push factor that should, presumably, lead to higher demand for investment migration.

LatAm has higher taxes than Southeast Asia and can never seem to rid itself entirely of the deeply ingrained eat-the-rich mentalities that see the region fall prey to socialist populism at regular intervals. Southeast Asia (in this respect, mirroring Eastern Europe) appears to have been inoculated against that cultural affliction in the medium term thanks to its having taken Marxist theory to its practical extreme a generation ago and suffering the corresponding consequences.

On the face of it, most conventional incentives to seek out alternative residencies and citizenships are present in Latin-America.

And yet, while among the 800+ investment migration firms registered in the Residence & Citizenship by Investment Company Directory, 100 have offices in Southeast Asia, only 13 have a presence in Latin-America. Among those with 50 or more employees, only NTL Trust has a presence in the region, and that in Mexico and Panama, not the South American mainland.

By virtue of their colonial-era ties to Spain and Portugal, Latin American passports generally have, much like Eastern Caribbean and Pacific island states have it thanks to the British Commonwealth, visa-free access on par with European and North American ones. With the exceptions of Bolivia, Ecuador, the Dominican Republic, Cuba, and Belize, all Latin-American countries have visa-free travel to Schengen, and all have more than 120 visa-free destinations.

Of course, visa-waivers only grant the possibility of travel to Schengen for three months in any six-month period, and not to settle. So you’d think there would still be a hefty market for citizenships among those who wish to permanently settle in Europe or at least a very large market for residence by investment.

But there’s another big difference between LatAm and Southeast Asia that acts as a brake on demand for investment migration in the former.

#2 The region’s HNWIs are, overwhelmingly, of European descent

Roughly one-third of Latin Americans are of European heritage. A sizeable proportion of these have at least one grandparent who was born in Europe – typically Spain, Portugal, Italy, or Germany – often entitling these individuals to acquire citizenship in Europe by descent. Furthermore, in Latin America, there’s a great deal of overlap between being of European descent and being wealthy.

The below graph is telling.

Knight Frank’s survey of Ultra High Net Worth Individuals reveals that Latin-America’s super-rich are the most likely among peers globally to already hold a second passport; 71% already have more than one nationality, double the global average.

See also: 71,300 UHNWIs Already Have Second Citizenship; Another 57,400 considering it

It also shows that they are the most likely to consider a second passport, but that may well imply that they are considering acquiring one by dint of having European ancestry, and not by ius pecuniae.

Latin Americans certainly have an appetite for leaving their continent – the graph above shows they are the most likely among their peers to consider permanent emigration. It’s just that they are less likely than Middle Easterners, Asians, Africans, and former Soviets to require the services of an investment migration firm to realize that objective.