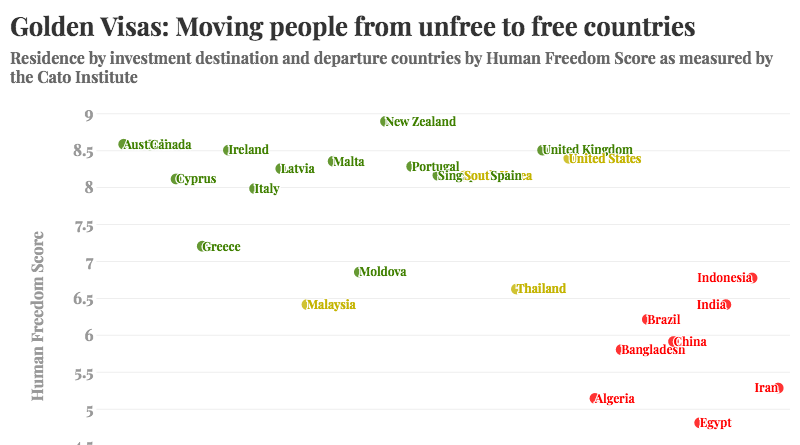 Our analysis confirms what most industry stakeholders have believed for a long time; residence by investment programs are, at their core, a mechanism for moving people from unfree to broadly free countries.

We have written before that one of the most transformative and meaningful roles investment migration plays in world economics and politics is to punish countries that suppress the civil and economic liberties of its citizens and, correspondingly, rewards those jurisdictions that largely steer clear of coercion.

See also: Visa-Freedom Has Causal Effect on Democracy Score, But Not on GDP, Researchers Find

While it’s true that, at first glance, it appears only the rich in unfree countries benefit from this, it’s also true that a rich person having new options and leaving – bringing with him/her capital, talent, and other resources – has a disproportionately negative impact on the tax receipts of the unfree regime compared to a middle-or-lower income class individual departing.

Nearly seven hundred firms in our Residence and Citizenship by Investment Company Directory can assist with applications to every investment migration program under the sun.

To discourage the rich from leaving, or encourage them to return, the more coercive regimes would have to change to become more like the countries to which their best and brightest are going. In practical terms, that means they must become freer and treat their citizens better. Not just the rich; everyone.

Investment migration is one of several indispensable levers that prevent despots from subjugating their populations with impunity.

Now, for the first time, we have statistical evidence to support that theory.

The Human Freedom Index and its relationship to investment migration

The Human Freedom Index (HFI) is the most comprehensive index of overall freedom in the world ever created and ranks countries from 1 to 10 on their overall freedom. Jointly published by the Cato Institute, the Frasier Institute, and the Friedrich Naumann Foundation’s Liberales Institut, the index draws on dozens of more specific indices to quantify the freedom of humans along 79 distinct indicators.

These measure things like Rule of Law, Security, Religion, Business Freedom, Size of Government, Identity and Relationships, Property Rights, Access to Sound Money, and many, many more.

The HFI, in turn, obtains its quantitative data from a plethora of more specialized indices that themselves have rigorous methodologies. These include the Index of Economic Freedom, the Press Freedom Index, the World Bank’s Ease of Doing Business Ranking, the Economist’s Democracy Index, and so on. The HFI, therefore, is more appropriately thought of as a meta-index.

No country in the index scored higher than 8.89 (New Zealand) and none lower than 3.77 (Syria). The average human freedom rating among all countries was 6.89.

For our purposes, we compared only the countries relevant to investment migration. We found that, in all but a few cases, the destination countries have a considerably higher Human Freedom score than the departure countries.

Investor migrants are voting with their feet and with their dollars. That they are casting their ballots in favor of freedom – economic, political, and social – is incontrovertible.