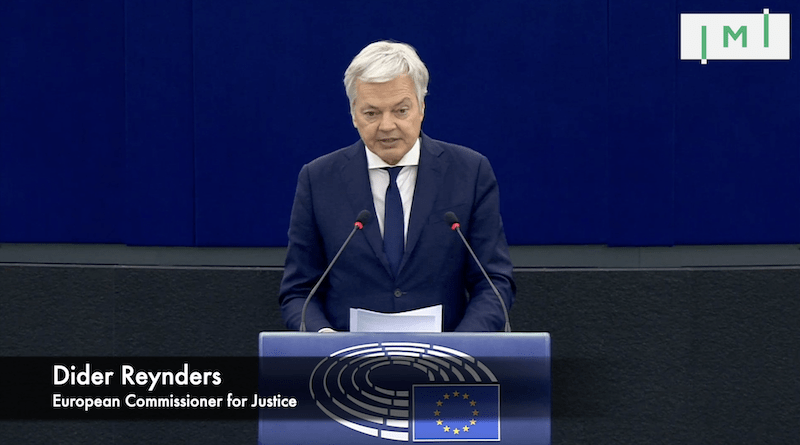 During the first of three Plenary Session days in the European Parliament today, MEPs and Justice Commissioner Didier Reynders debated MEP Sophie in ‘t Veld’s report, which seeks, among other measures, to end citizenship by investment both in Europe and farther afield.

Though today’s session was meant to be a debate, the parliamentarians and the Commissioner all agreed that citizenship by investment activities in Europe should cease, diverging only on the means by which to reach that goal.

In ‘t Veld said investment migration programs “are not about attracting any meaningful, legitimate investment in the real economy of Europe. They are designed for shady business, shady money, and shady characters.”

She also claimed that Maltese journalist Daphne Caruana Galizia “was murdered, among other things because she exposed the corruption-riddled trade in passports.”

Responding to in ‘t Veld’s calls for “phasing out golden passports” by way of lawmaking, Commissioner Reynders expressed hesitancy as to the “legal and political feasibility of such a legislative proposal,” which, he said, “would need to be carefully assessed, in particular at a time when infringement procedures are still ongoing.”

Reynders also said he welcomed the Maltese government’s decision to suspend citizenship by investment applications for Russians and Belarusians, a move he laconically referred to as “a positive first step”.

While in ‘t Veld argued that “the time to ask national governments nicely is over” and that the European legislators – not those of the individual member states – should put an end to EU CIPs once and for all, Reynders considered infringement procedures “the best way to phase out citizenship by investment schemes in the member states.”

Regulate and tax RBI to the point where they’re not attractive for applicants or governments, and “abolish” CBI altogether, even in third countries

In ‘t Veld called for “very strict regulation of the golden visas, to the point where they will lose their attractiveness for callous opportunists. Background checks shall be tightened, intermediaries shall be strictly regulated, and requirements of physical presence shall be strictly enforced.”

Reiterating a key point of her report, in ‘t Veld said she wanted to introduce stipulations around which types of investments are permitted. Residential property investment, she indicated, would not be enough. The investment must be in the “real economy” and conform to “the climate and social objectives of the union”, she said, without elaborating on the meaning of those terms.

The report also proposes to impose a tax [the MEP called it a levy] of up to 50% on the national governments’ proceeds from CBI programs. To this request, Reynders protested that “such a measure would present a risk of legitimizing such schemes. Our position is very clear; these schemes must be completely abolished and should not be legitimized in any way.”

In a clear reference to the citizenship by investment jurisdictions of the Caribbean, in ‘t Veld commented that “third countries, often mini-states or statelets, who benefit from visa-free travel in the European Union, should be banned from issuing golden passports.” The MEP did not explain how she proposed to ban activities enshrined in the nationality laws of sovereign nations that are not EU members.

The first vote on whether to adopt the proposal will take place tomorrow, before a final vote on Wednesday. Should the plenary vote to endorse the proposals in the report, they will be forwarded to the European Commission – the EU’s executive branch – for consideration. The Commission will then have the choice of either preparing legislative proposals based on the report or providing a justification for why it will not do so.

IMI will be back with more analysis on the outcomes of the Plenary Session debates and votes.