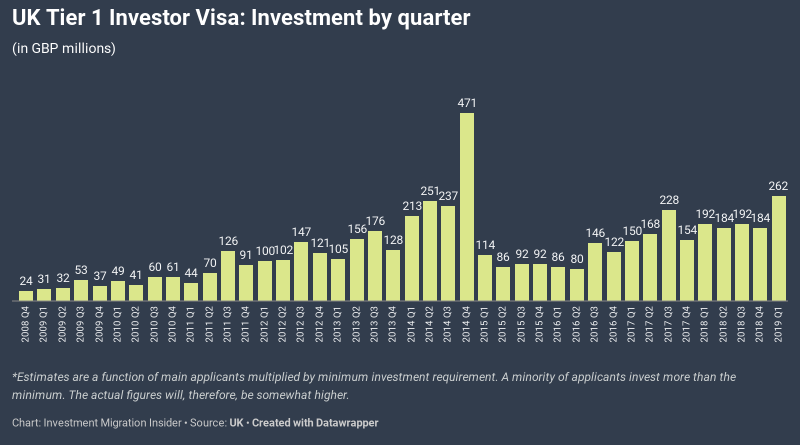 Not since 2014, when the investment requirement was half what it is today, has the UK Tier 1 Investor Visa seen more applications than during the first quarter of 2019. Driving the record-breaking investment volume was the false-alarm suspension announcement in December.

131 main applicants obtained visas in the UK through investment in the Tier 1 program during the first quarter of 2019. That represents a 42% increase on the preceding three months and is the highest number recorded since 2014 when the investment requirement was one million pounds, half the current minimum.

As is their custom, Chinese nationals constituted the largest applicant group, accounting for just over half (66) of visa recipients. Add to that Hong Kong, Macau, and Taiwan, and the overall share of Chinese visa recipients rises to 57%.

A very distant second, eight Brazilian investors got approvals, a new record for that country and the first time it figures in the top three. Russia, the US, and Canada each saw six of its nationals receive investor visas, while South Africans, Australians, and Kazakhs each accounted for two approvals.

No doubt spurring the sudden increase in interest was the panic that ensued when the UK Home Office on December 5th announced – and later backpedaled on December 11th – an upcoming suspension to the program pending reforms.

Those reforms have since come into effect, but in a seamless manner and without any disruption to the program.

See: The UK’s New Startup and Innovator Visas: A Detailed Explanation of How They Work

Shard Capital’s Rafael Steinmetz-Leffa says his firm handled at least half of all the Chinese investors in Q1 and that he’s confident in chalking the sudden swell in interest up to the announcement of a planned reform and suspension.

“The spike in numbers was clearly due to the uncertainty of what the new rules would be. Seeing that, now, the vast majority of Tier 1 Investors from the Greater China region were successful business people, we’ve observed a marked demographic change and a higher level of sophistication among new clients. Their reasons for investment are still taking advantage of a cheaper pound while building a neutral position concerning instability globally.”

Conservatively estimated – that is, presuming each applicant invests only the minimum of GBP2 million, which is not the case in reality – the Tier 1 program raised 262 million pounds in Q1. The true figure is likely closer to 300 million.

Hundreds of companies can assist with applications to the UK Tier 1 Investor Visa program. See which ones in the Residence and Citizenship by Investment Company Directory.