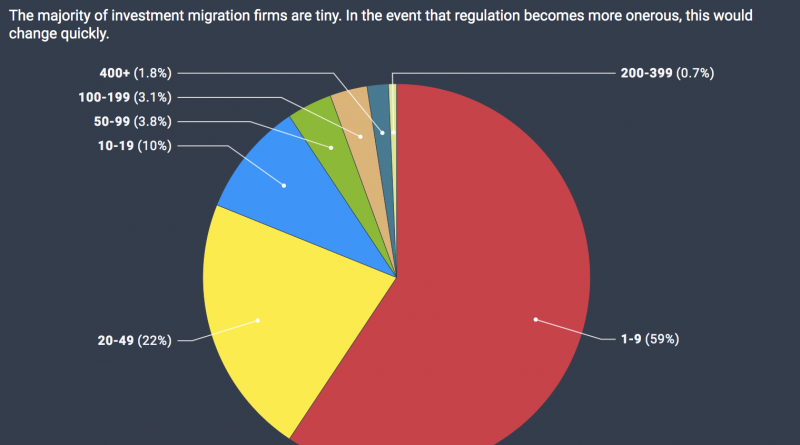 An analysis of the more than 600 firms registered in the Residence and Citizenship by Investment Company Directory shows that some 60% of companies are tiny.

By virtue of its relatively open regulatory environment, barriers to entry in the investment migration industry are not particularly high. Anyone with a fistful of dollars, a laptop, and cursory knowledge of the most common RCBI-programs can open an investment migration consultancy with but little effort. The cost of compliance is low and the tax burden is light, particularly in Dubai, which – not by chance – has the world’s highest concentration of RCBI-advisories.

Of the more than 600 companies in the RCBI-Directory, we’ve looked only at those that list investment migration as their core business, excluding firms that offer such services as part of a wider product line. This whittles the number down to 450.

Of those, only eight firms have more than 400 employees. All of these are based in China. Three firms have between 200 and 399 employees and fourteen have 100-199.

But 60% of the 450 companies whose principal business is investment migration are small shops; 267 companies have fewer than 10 employees.

The cottage-industry characteristics of the investment migration market have driven speculation as to a possible trend of consolidation in which larger firms absorb smaller ones, both as a means to reduce the number of competitors but also to grow through acquisitions rather than organically.

Earlier this year, Jürg Steffen, CEO of Henley & Partners, indicated as much during an interview with IMI in Davos.

“What will probably change in the future is that we will not have as many very small companies because there will be, probably, regulation in the industry. And when you have regulation, of course, you need compliance officers, you need structures and processes in place and, therefore, the company size has to grow,” Steffen said in January.

Steffen’s prediction is substantiated by historical observations of similar consolidation phenomena in a variety of other industries. As regulations increase, the cost of compliance grows in tandem. As fixed overhead rises, smaller outfits find their margins shrinking, often beyond redemption. There’s a reason you don’t see many banks with fewer than ten employees. Large incumbents, naturally, tend to welcome regulation of their industries for this very reason.