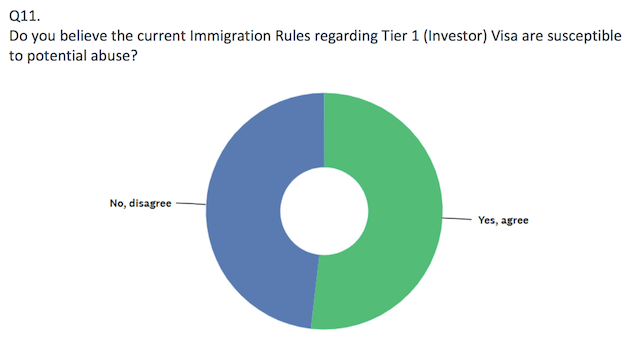 When, in December last year, the UK Home Office announced it intended to reform the rules that govern its UK Tier 1 (investor) visa program, the industry speculated as to what specific changes such reform might entail.

To learn more about the amendments to the program, read Arthur Sarkisian’s analysis of the proposal here: UK Tier 1 Changes: Bond Investments Now Ineligible as Home Office Moves to Increase Benefit to Economy

While the Home Office did consult with some leading service providers in the field, the Home Office did not announce any plans for a formal or comprehensive survey of stakeholders. Farzin Yazdi, head of Investor Visa at Shard Capital, therefore took it upon himself to gather views of industry incumbents. “The results from this survey will be amalgamated and reviewed, with the findings presented to Ministers and Migration Policy,” Yazdi told IMI in February. Over a two-week period, he received 160 responses. What follows are the highlights of the results of that survey.

Opinions split on investment types and amounts, but pooled investments favored by virtually everyone

Stakeholders agree that control could be tighter