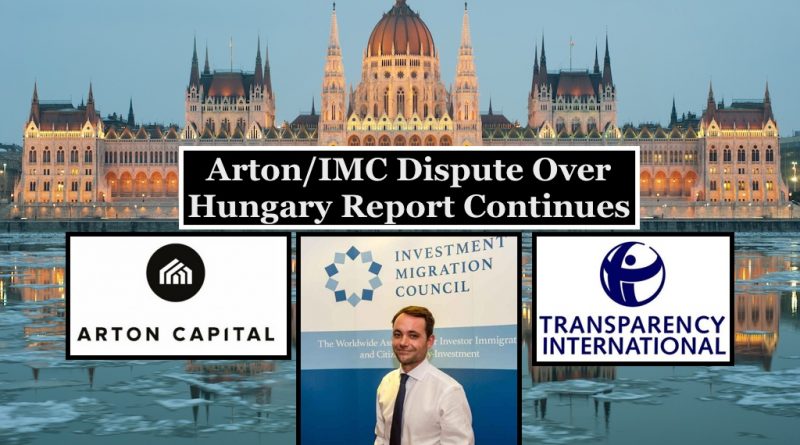 On Saturday, Arton Advisors published a press release in which the firm states it is very much moving ahead with its lawsuit of the Investment Migration Council over a report the Council published in cooperation with Transparency International. Responding to the press release, the IMC maintains, as it did in June when Investment Migration Insider first broke the story, that it has not been made aware of any lawsuit and that it “stands by every word in the report”.

Arton’s press release is reprinted in full below:

Arton Advisors Presses on with Court Case Against IMC

Dubai, UAE — In June of last year, Arton Advisors FZE filed a Court case with reference no. 521/2017 against a highly defamatory report, instigated by the Investment Migration Council (IMC) which resulted in significant loss to Arton Advisors.

The court appointed Jala Younis Al-Khaleda, a media expert, who is mandated with reviewing the defamation action, and Yousef Taher Al-Khajal, an accounting expert, who is mandated with determining the level of damages. Despite delays in the court proceedings owing to IMC’s failure to respond to the court, Dubai Court’s experts met on Sunday, January 7 and Tuesday, January 9 to review the evidence in the proceedings.

The case centers on the publication of the report “In Whose Interest – Shadows Over the Hungarian Residency Bond Program”, which was sponsored and publicised by the IMC. At the time IMC had a representative office in Dubai run by Citizenship Invest.

Despite repeated warnings from Arton Advisors’ lawyers, the IMC continued to promote the report and even proceeded with discussing it in a special session at its annual meeting in Geneva in June. The IMC also promoted the report at a press conference in Budapest, Hungary, and through numerous articles which were published in the aftermath.

The Dubai Court is discussing sending both experts to the IMC’s offices in Geneva within the next couple of weeks. The visit will then be followed by a hearing in Dubai on February 16.

Arton Advisors’ rights have been reserved as it presses forward with pursuing damages against those involved in the publication of the report.

IMC: Not been served, done nothing wrong

“The IMC has never been notified of this “lawsuit” and did not take part in any court proceedings in this regard,” write the IMC’s CEO Bruno L’ecuyer and its Chairman Dimitry Kochenov in an email to Investment Migration Insider.

“Slightly less than a year ago we have already read about a similar lawsuit in the Caribbean press and, as we understand, that one did not go anywhere for obvious reasons: IMC is not present in Dubai and has done nothing wrong. The academic report we released together with Transparency International, which has been co-authored by one of the most renowned Hungarian Professors in the field of migration regulation, Prof. Boldizsar Nagy and Transparency International experts takes an issue with the anarchic way in which the Hungarian government organised its investment migration programme, which has now been suspended,” they continue.

The IMC emphasizes that they stand by their report, and explain why they chose to work with Transparency International to craft it.

“Hungary, under Prime Minister Orban, drawing inspiration from Mr Putin’s ‘illiberal democracy’ has provided an unfortunate example of undermining the basic principle of the rule of law, as reported by the European Parliament and the Venice Commission for Democracy through law, among others. Transparency International has been at the forefront of criticising the government, also bringing cases against its twisting the rules to Hungarian courts. TI was thus a natural partner for the IMC to work with in the country. Hungary’s investment migration handling was thus not atypical of other areas.”

Arton has accused the IMC of using the report to attack its business, arguing that the contents were both incorrect and defamatory. The IMC, on its side, points out that the language used and the arguments put forth in the report were no accident.

“As the report explained, the residence bond programme’s organization fell far short of basic rule of law standards, did not offer sufficient protection to investors, and was designed in such a way that it could not be objectively justified: “The investment immigration programme (settlement bond) cannot be justified by the state’s economic interests, as it does not generate investment into the economy, nor does it produce jobs.” The IMC certainly stands by every word of this report, which illustrates very vividly how NOT to design investment migration programmes: when investments are not sufficiently protected, financial (or any other) benefit to the country does not exist, and there is no transparency in the selection of agents and day-to-day running of the programme, it is clear, that no legitimate concerns could possibly justify its introduction.”

In a demonstration of their commitment to the report, the IMC – in direct opposition to Arton’s admonishments – urges readers to scrutinize the report for themselves.

“The report, which is a peer-reviewed academic work, makes a strong case against the Hungarian government’s approach to investment migration and IMC welcomes the closure of the programme, which is undoubtedly a move in the right direction. Please ask your readers to consult the report on the portal of Transparency International Hungary: https://transparency.hu/wp-content/uploads/2017/01/In-Whose-Interest_Shadows-over-the-Hungarian-Residency-Bond-Program.pdf”

Boldizsár Nagy, one of the report’s co-authors from Transparency International, summarized the publication’s findings:

“Hungary’s residency bond program, effectively introduced in 2013 and suspended in 2017 provided a gateway to the European Union, without benefiting the Hungarian economy. The sum of 300.000 euros, the price of a Hungarian residency bond with a five-year tenure, bought an unhindered access to the Schengen-zone of the European Union for any qualifying non-EU citizen but led to no direct investment within Hungary. Personal presence in Hungary of the participants in the program in was not required. Though issued by Hungary’s state debt management agency, applicants could only buy residency bonds from intermediary companies licensed by a committee of the Hungarian Parliament.”

Nagy continued to write that “the report shows how the adoption of the rules entailed deviations from the usual parliamentary procedures and how the implementation of the system engendered significant income with the intermediary companies while only providing minimal, and with the passing time increasingly costly contribution to the reduction of state debt in foreign currency, which finally led to the suspension of the system in Spring 2017.”