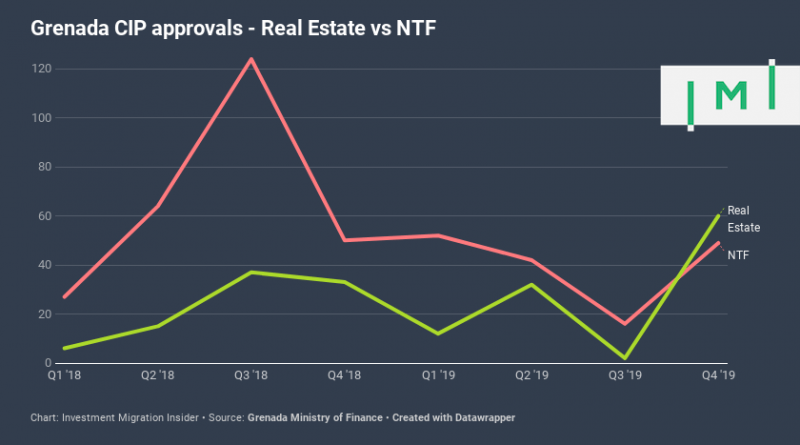 The Grenada Citizenship by Investment Programme (GCIP) raised EC$166 million in 2019, 13% more than its 2018 record. Driving the upward trend was a sharp uptick in real estate investments during the fourth quarter.

Grenada’s real estate option appears to be enjoying a renaissance; in the fourth quarter, the number of investors who opted for property invested exceeded that of those choosing donations, a feat not observed since 2016.

For 2019 as a whole, the program raised EC$79 million in real estate investments, a 47% increase on the preceding year and, by a wide margin, the highest such figure on record. Another EC$86 million were raised through the NTF option, while the government collected EC$8 million in fees.

Clouden delivers
Head of the Grenada Citizenship by Investment Unit (CIU) since August, Percival Clouden is delivering on his promise to drastically increase the CIU’s processing rate; while processing slowed to an alarming rate in August due to what observers have called a “messy” handover, Clouden quickly brought the Unit up to speed after taking the helm. Whereas the CIU processed only 8 applications in August and September combined, the Unit processed an average of 45 applications a month during the fourth quarter.

Want to know more about the Grenada CIP? To see recent articles, statistics, official links, and more, visit its Program Page. To see which companies can assist with applications to the Grenada CIP, visit the Residence & Citizenship by Investment Company Directory.