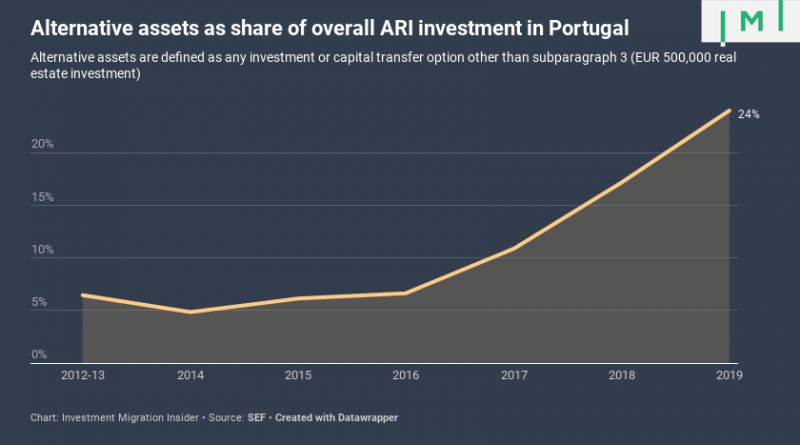 The share of investors who pick options other than the conventional EUR 500,000 property purchase has more than tripled in the last three years.

Portugal’s Borders and Immigration Service, the SEF, today released figures covering the full year of 2019. Thanks to its new reporting format, we now have access to somewhat richer data on applicant preferences. While until recently, the SEF provided statistics on only the two broader investment categories – real estate and capital transfer – they have now begun to report on the respective subclasses of both categories.

The data set released today shows that, while the conventional EUR 500,000 real estate investment option remains the investor favorite, its share of overall ARIs has fallen from 93% in 2016 to just 76% in 2019. The most popular alternative investment – subparagraph 4, which stipulates a EUR 350,000 investment in buildings constructed more than 30 years ago – has seen its share of the total grow prodigiously since 2016. That year, only one in a hundred investors chose “fixer-uppers”; in 2019, this share had risen to one in six, as 214 ARI applicants opted for older properties.

A total of seven ARI investors picked the recently introduced EUR 350,000 Venture Capital/Fund Investment option, all in 2019. The number of applicants who chose the EUR 1 million bank deposit option (subparagraph 1) has remained stable at around 5% of the total since the start.

In the program’s seven-year history, only 17 investors have chosen the job creation option, which mandates the generation of ten full-time positions. Not a single applicant has ever been approved under subparagraphs five and six (scientific research and cultural heritage contributions, respectively).

1,245 main applicants and 2,192 of their family members received approvals in 2019 as a whole, a figure 12% below that of 2018 and the lowest recorded since 2015. Overall investment during the year saw a corresponding decline; applicants injected EUR 742 million in the program in 2019, down from EUR 849 million in the preceding year.

While Chinese (54%), Brazilians (11%), Turks (5%), South Africans (4%), and Russians (4%) remain the largest applicant nationalities on a cumulative basis, 2019 saw the entrance of Americans among the top five nationalities.

In 2019, 65 Americans (about 5% of the total) obtained ARIs, while only 31% of recipients were Chinese, their lowest annual share on record and a far cry from the more than 85% share Chinese nationals held just four years ago.

Want to know more about the Portuguese golden visa? To see recent articles, statistics, official links, and more, visit its Program Page. To see which firms can assist with applications to the program, visit the Residence & Citizenship by Investment Company Directory.