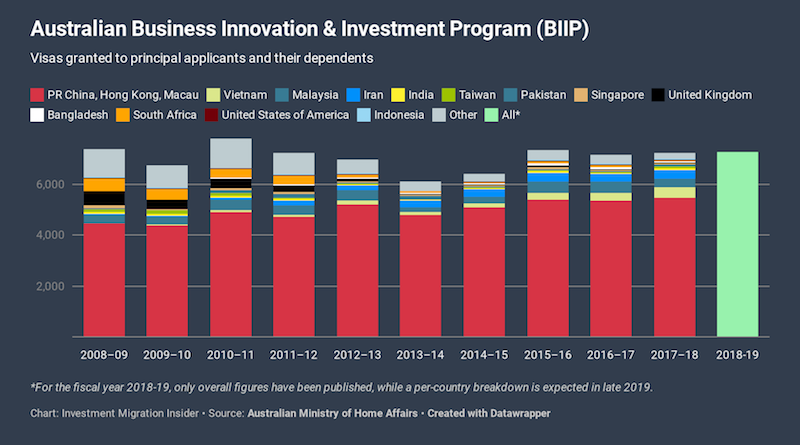 Close to 80,000 investor migrants and family members had obtained Australian visas under the BIIP by the end of June last year, but 18,682 applicants were “in the pipeline”.

Australia’s Business Innovation & Investment Program (BIIP, or, subclass 188) is the stream of Australia’s general migration program that relates to investor/entrepreneur-type visas. Over the last decade, 77,886 principal applicants and dependents have received visas under the BIIP, some 71% of whom were from Greater China.

The BIIP stream, in turn, has seven substreams (official descriptions in italics):

Two data sets for the program are publicly available; the overall number of individuals (main applicants and dependents) granted visas under the BIIP (all streams) sorted by country, and detailed statistics only for the Significant Investor Visa (SIV) substream, which you can find here.

Since 2015, the BIIP stream has been limited to 7,260 places. For the last several years, the number of applications submitted has exceeded the number of places available by a wide margin.

If you like these statistics, you’ll love our Data Center.

In other words, the number of applicants is consistently more than double the number of available places. Recent reports from Hong Kong portend historically unprecedented increases in interest in Australian immigration for the 2018-19 fiscal year – to say nothing of 2019-2020, the period in which unrest in that city began in earnest. The report for fiscal year 2018-19 is due in November.

If you want to know more about Australia’s BIIP, visit its Program Page, where you’ll find statistics, recent articles, official links, and more. To see a list of companies that can assist with applications to the BIIP, explore the Residence & Citizenship by Investment Company Directory.