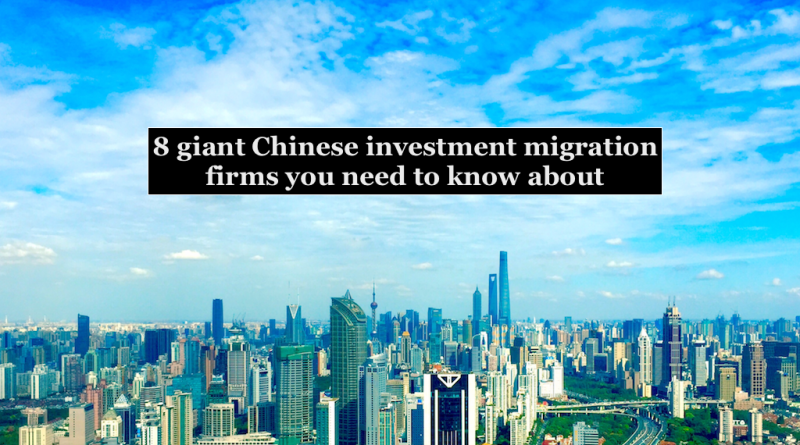 Conservatively estimated, 20,000 Chinese investors emigrate through golden visa and/or passport schemes every year. Most of them from a very small number of gargantuan firms. If you want a piece of the annual $10bn+ Chinese investor migrant market, start by approaching the big guys.

As there’s no way of knowing precise revenue or customer figures, it’s difficult to say precisely which firm is the biggest, so the companies are not listed according to size. They’re all huge, though.

With 10 of its 17 offices located outside of mainland China, Delsk is perhaps the most internationally diversified Chinese investment migration group (they’re even on Facebook) and they have a slightly different business model than most of its Chinese peers: Delsk relies on an extensive network of more than 700 cooperative partner companies globally. Founded in 2008 in Germany, Delsk Group is headed by Mr. Wang Jing (王靖).

In addition to its presence in China, Wailian has four offices in North America, and one each in Madrid, Singapore, and Sydney. Linda He heads the company. You can read an extensive interview with her here.

With the Chen brothers at the helm (Vincent and David), Visas Consulting Group have grown to become one of the absolute biggest residence-planning firms in China and one of the best known among consumers. In recent years, VCG have been publishing the annual Chinese Immigration Index in cooperation with Rupert Hoogewerf’s Hurun Research, the company that publishes the widely reported-on rich-list for China. VCG are particularly strong in the North American program realm: They’ve lodged thousands of applications for US EB-5, as well as for a variety of Canadian programs.

QiaoWai has recently been in the news all over the world thanks to its close cooperation with Kushner companies on the EB-5 funding for a New Jersey residential development. CEO Ding Ying founded the company in 1999.

Founded some 23 years ago, Well Trend is among the oldest investment migration companies in China, and is headed by its charismatic founder and president Larry Wang, who frequently appears in interviews with international media such as CNN, Bloomberg, WSJ and, most recently, on Investment Migration Insider. As with most of the giant firms in the country, EB-5 and Canada have traditionally been the bread and butter also of WTU, but the firm has recently become a leading presence also in the European golden visa market, showing particular prowess in delivering applications to Malta’s RVP.

In contrast to most other large investment migration firms in China, whose primary offerings are US and Canada with other residence and citizenship programs treated as alternative products, Globe Visa’s program portfolio is more evenly diversified. Walk into a GV weekend-event (typically in a ballroom at a nice hotel in a big city), and you’ll find at least 20 booths, each dedicated to a different country. Outside of China, Globe Visa has offices in Vancouver, Toronto, Singapore, Melbourne, Barcelona, and Cyprus.

EK is short for Eddie Kwan. When it comes to the Guangdong province, the richest (per capita) and most populous province in China, not many companies can beat EK’s volumes. Someone I know very well who used to head one of the world’s largest non-Chinese investment migration companies once told me that during a meeting with Eddie Kwan, my friend shared with pride that his company had processed more than 300 applications that year. Eddie Kwan smiled knowingly, looked at my friend and said “I processed 500” before adding “…this quarter”.

After years of education and scientific research in Canada, Dr. Henry Zou founded his company in 1995 with the aim of helping Chinese applicants settle in the United States and Canada. To this day, Henry Global focuses predominantly on US EB-5 and Quebec IIP, and not much else.

There are thousands of investment migration firms in China, and in the 100+ employees category, there are at least 50. Start by exploring companies like Austar, CanAchieve, WorldWay, HuaXia, Shanghai Overseas, and YingKe.