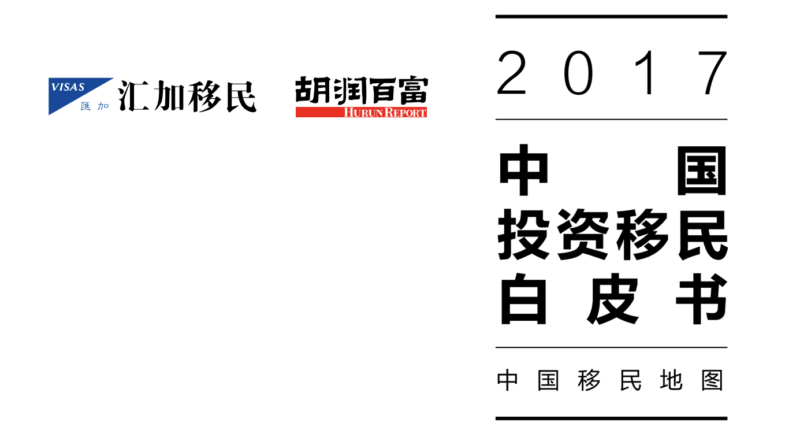 Today, the Hurun Research Institute in association with Visas Consulting Group (a leading Chinese immigration company) released the Immigration and the Chinese HNWI 2017. The report includes the Chinese Immigration Index, a ranking based on an investment migration program’s suitability for Chinese applicants, as well as a host of data on which destinations Chinese immigrants prefer, and what their main motivating factors are.

The United States remains the most popular emigration destination for HNWI investment emigrants for the third year running. Canada, which has been behind the UK for the last two years, overtook the UK for the first time this year, while Australia remains in fourth. Malta, Antigua, and Dominica enter the top ten for the first time, according to the Chinese Immigration Index. Hurun Research, along with Visas Consulting Group, has selected the most suitable destinations for China’s HNWI investment immigrants according to eight criteria, namely education, investment destination preferences, immigration policy, property purchasing, tax, medical care, visa-free travel, and ease of adaptability. Countries with no active investment immigration policy were not considered. 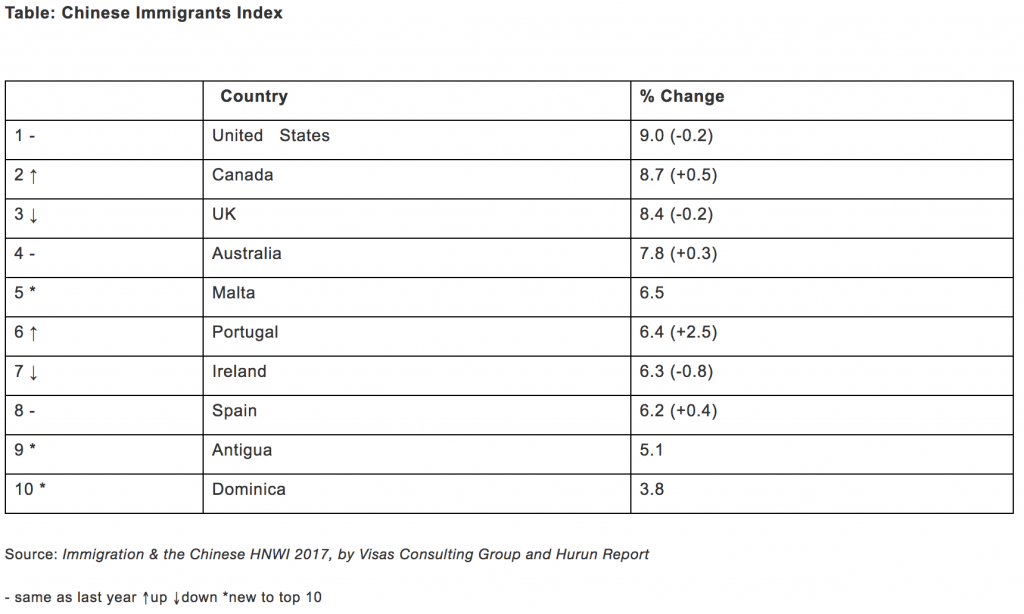 The United States is once again the top destination for investment emigration and property purchasing. Los Angelesremains the most popular city in North America among Chinese HNWI for the fourth year running, while Seattle is on the rise every year, comes ahead of third-placed San Francisco for the first time, in second place. New York remains the fourth most popular city, followed by Vancouver in fifth. Overall, US cities have seen a fall in favor since the Trump Presidency.Overseas property:

HNWI from China’s South and East regions prefer the economically developed coastal cities of the United States, including Seattle (13.1%), San Francisco (10.4%), New York (9.9%) and Boston (7.8%), while those from the North and West prefer destinations with clean air and access to nature such as New Zealand (5.4%) and Sydney (4.3%). 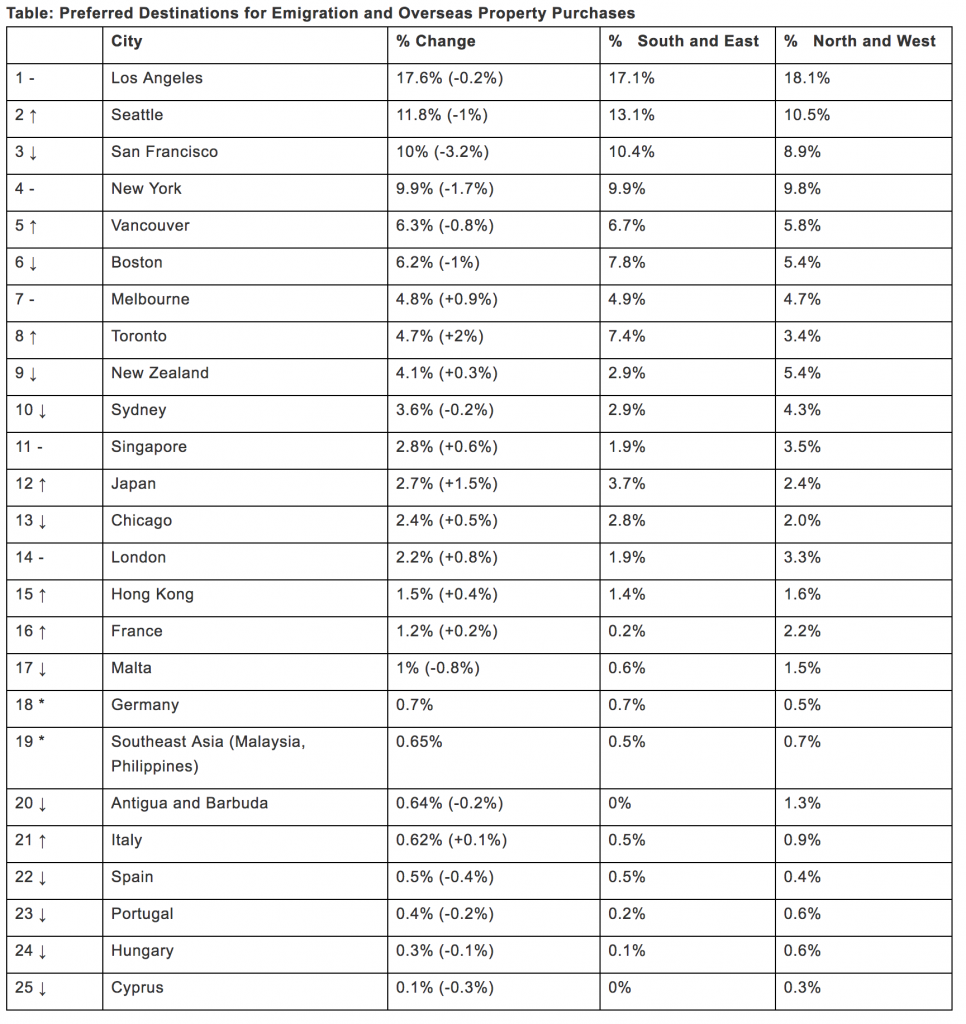 Education and living environment continue to be the main reasons for emigrating overseas for the fourth consecutive year, accounting for 76% and 64% respectively. In addition, a new motivation, the desire for an ideal living environment, accounted for 53% this year, while other reasons included medical care, with 29%.

27% said that long waiting times are their biggest hindrance to overseas immigration, top again for four consecutive years, although 1% less than last year, followed by language barriers and the difficulty of integrating into mainstream society with 17% and 15% respectively, 2% and 4% less than last year. Application difficulties, loneliness and being unable to emigrate with their families has increased from last year, the proportion citing high costs as a significant obstacle saw a sharp decline this year. Regional differences include those from the South and East – used to a faster pace of life – being more likely to be concerned by long waiting times, language barriers and loneliness, while those from the North West worrying more about application difficulties, being unable to emigrate with their families, and high costsas greater obstacles.

34% HNWI said they were considering moving to a different city in China. “Hoogewerf said, “With one third of Chinese HNWIs looking to move city, especially to first tier cities, that suggests premium house price have still a long way to go.” The main reason is the pollution of the living environment, which accounts for 52% of the total. Education quality (44%), ideal environment life (37%), food safety (24%) and medical level (21%) also have a higher proportion. On the question of choosing domestic cities, 46% of HNWI choose the first-tier cities such as Beijing, Shanghai, Shenzhen.

A massive 84% of HNWI are concerned about the devaluation of the yuan, up 50% on last year. Nearly half express concerns about the exchange rate of the dollar, foreign exchange controls and domestic property bubbles. Respondents are paying ever-closer attention to overseas financial management (property funds, insurance and so on) at 26%, double last year’s proportion.

Lack of overseas investment knowledge is the main concern for HNWI with regards to overseas financial investments for the fourth consecutive year, accounting for 37%, down 3% this year. With the tightening of foreign exchange controls, 20% of HNWI chose such controls as their main issue. The third biggest problem remains the non-investment channel, but the proportion is 8% less than last year.