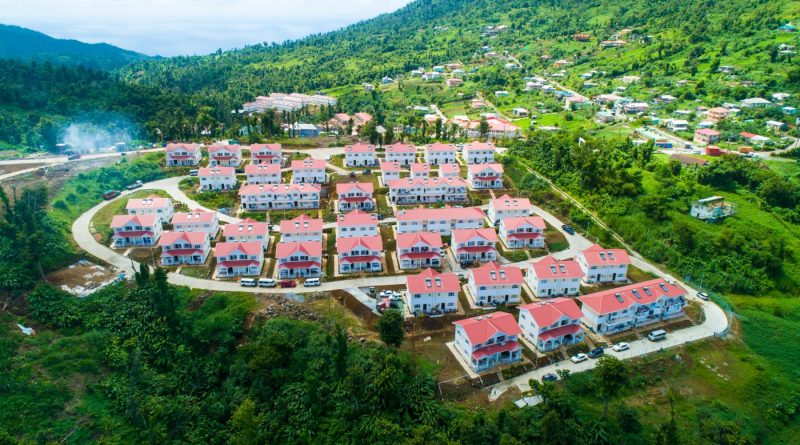 Bellevue Chopin did not always look like this. The country of Dominica was hit by two devastating natural disasters – Tropical Storm Erika and Hurricane Maria; within 2 years of each other.

Mother Nature did not allow Dominica to breathe and rise from the devastating effects of Tropical Storm Erika in August 2015. Multiple landslides destroyed Petite Savanne causing 6 fatalities and 14 missing persons, and a total of 217 homes were wrecked. The Prime Minister had to declare the area unsafe and off-limits which forced the evacuation of the residents and their relocation to Roseau. In addition to this, while the Government was in the process of developing Bellevue Chopin Housing to resettle the displaced residents, another natural disaster, Hurricane Maria hit the country in September 2017 without care for its people.

This disaster, however, was a blessing in disguise. It jump-started the Government’s decision to create climate-resilient housing facilities all over the country. It has always been the aim of Prime Minister Roosevelt Skerrit to provide affordable housing for his people, but because of the country’s prone to experience adverse weather, it pushed the Prime Minister to embark on a journey towards becoming the first climate-resilient nation in the world.

Of course, before the journey began, Bellevue Chopin Housing or Bellevue Chopin Resettlement Programme was the country’s primary response to the displaced residents of Petite Savanne when Tropical Storm Erika hit. The housing project consists of 6 Zones and 1 Commercial Complex.

ZONE A1 – has 98 units and is all currently occupied by families from Petite Savanne.

“It is the first time I experienced that kind of rain since we moved in… there was no flooding inside my home. Not a single drop of rain. What amazes me is that as soon as the rain stopped, the water in the streets just vanished, as if it never rained. Everyone in my family remained dry.” – Mary Fontaine, one of the residents in Zone A1.

ZONE A2 & B2 – has 84 units is currently undergoing the completion of fixing pavers and termination of electrical cable.

ZONE C1 – has 98 units and is all currently occupied.

“It’s such a big relief that our house is very sturdy and climate-proof, you know?

I always get scared… trauma… when it rains a little bit too hard and the wind starts picking up. Now that I am here, I am not afraid that my roof will be blown away and our home will tear up, even the rain was consistently pouring hard last Sunday,” Richie Baron, a resident of Bellevue Chopin Housing.

“I am very much happy, I feel I am in paradise, it is a lot safer here,” – Justine Baron, another resident.

ZONE C2 – has 54 units and is undergoing final paint application.

ZONE C3 – has 26 units and is currently undergoing paving slab on the veranda.

COMMERCIAL COMPLEX (Zone B1) – has 16 shops and 15 offices along with a farmers’ market and the first mall to exist in the country.

Located in Bellevue Chopin itself, the housing development is expected to be completed and handed over by the end of 2019. All in all, there are 353 units in this project. Sports amenities like a football pitch and a basketball court will also be built alongside offices and shops in the commercial complex.

Here is the most recent video site update that is out right now!

East Coast Housing Project is where the road to becoming the world’s first climate-resilient nation began. In March 2018, the Government of Dominica signed a contract with Montreal Management Consultants Est. (MMCE) to build houses along the east coast of the country. The company is headed by Dr. Anthony Haiden who from the very start of the housing revolution, has supported the Prime Minister in his endeavors.

The first in this project is Castle Bruce Housing. All units were just handed over to residents last September 17, 2019.

Watch the handing over ceremony here.

San Sauveur Housing is expected to be completed and handed over by the end of 2019 but is currently undergoing stucco application in the corridor and tiling works.

Delices Housing is also expected to be completed and handed over by the end of the year. The housing project, however, is currently undergoing formworks for internal staircase and concrete works for the remaining units on the 1st floor.

La Plaine Housing’s handing over ceremony is expected to be held within the next few weeks. Residents, cabinet members, and MMCE’s very own Project Manager, Mr. Chris Timmins, is expected to attend the event.

And last but not the least is Grand Fond Housing project whose handing over ceremony is also expected to be held within the next few weeks. Unlike the other projects in the East Coast Housing project, the two buildings in Grand Fond housing is located on the opposite sides of where they were developed. It is the only housing project that has its buildings away from each other.

The Final project that MMCE signed with the Government of Dominica in 2018 was the West Coast Housing Project – Georgetown Housing and Cotton Hill Housing.

It is expected to be completed and handed over by the end of the year.

Fun fact: It’s the only housing project with 9 buildings all parallel to each other!

Georgetown Housing has 2 phases – Phase 1 for housing units and Phase 2 for Government buildings and offices.

Phase 2 will commence shortly after the completion of Phase 1.

All 24 units of Phase 1 were handed over to residents in Portsmouth last September 14, 2019. Prime Minister Roosevelt Skerrit delivered a speech saying “Today, you will sleep in your new rooms tonight, and we will build more and give more, one key at a time.”

Prime Minister Skerrit has promised a resilient Dominica. A new and improved Dominica. A Dominica where families can feel safe in their own homes and won’t find the need to fly out of the country to receive health care.

This is only the beginning of a new era in Dominica.

Weak Q3 Expected for Greek Golden Visa, But Flurry of Reforms May Bring a Roaring Q4

May 18, 2020 Editor Comments Off on Weak Q3 Expected for Greek Golden Visa, But Flurry of Reforms May Bring a Roaring Q4
Editor's Picks Ten On The Weekend

May 17, 2020 Editor Comments Off on 10 on the Weekend – Hakan Cortelek: “Build a Team and the Rest Takes Care of Itself”
Editor's Picks Industry Trends Opinion

“Migration by Investment” in the Era of Deglobalisation

May 15, 2020 Editor Comments Off on “Migration by Investment” in the Era of Deglobalisation
Editor's Picks Industry Trends

May 6, 2020 Editor Comments Off on The Coming Sovereign Debt Crisis Will Give Birth to New Investment Migration Programs
Editor's Picks Europe

May 5, 2020 Editor Comments Off on Two More Projects Approved For Montenegro CIP, Also These in Ski-Town Kolašin

10 on the Weekend – Nestor Alfred: CIP Harmonization Still a Priority

May 23, 2020 Editor Comments Off on 10 on the Weekend – Nestor Alfred: CIP Harmonization Still a Priority
Editor's Picks Ten On The Weekend

May 17, 2020 Editor Comments Off on 10 on the Weekend – Hakan Cortelek: “Build a Team and the Rest Takes Care of Itself”
Ten On The Weekend

May 9, 2020 Editor Comments Off on 10 On The Weekend – James E. Harris: “Demand for Vanuatu CIP Can Explode if New Govt. Takes Action”
Ten On The Weekend

10 On The Weekend – Yakof Agius: “Firms Try to Set up a Self-Regulating Body With Limited Success”

April 25, 2020 Editor Comments Off on 10 On The Weekend – Yakof Agius: “Firms Try to Set up a Self-Regulating Body With Limited Success”
Ten On The Weekend

10 On The Weekend – Dr. Hussain Farooq: “I Firmly Believe Turkey Will Outperform”

April 18, 2020 Editor Comments Off on 10 On The Weekend – Dr. Hussain Farooq: “I Firmly Believe Turkey Will Outperform”

May 7, 2020 Editor Comments Off on Investment in Portugal’s Golden Visa Stable Despite Pandemic, Interest in VC-Option Gathers Steam
Intel & Data

Which RCBI-Countries Have Handled COVID-19 Best So Far?

April 22, 2020 Editor Comments Off on Which RCBI-Countries Have Handled COVID-19 Best So Far?