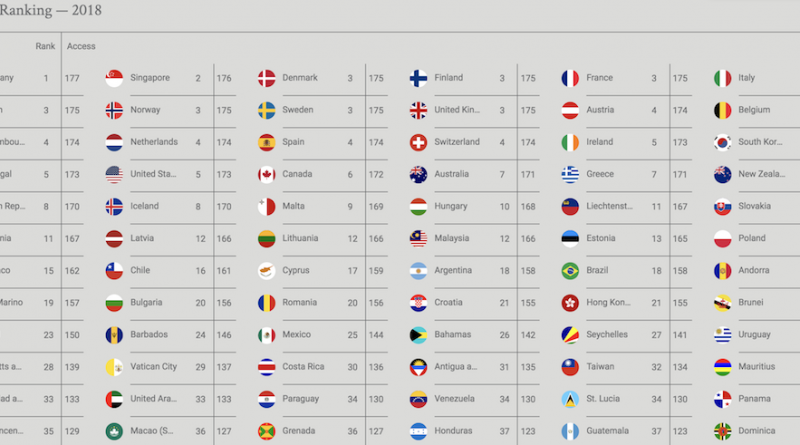 The Henley Passport Index is widely acknowledged as the original and most authoritative passport index, with historical data spanning 13 years. The global ranking is the only one of its kind that is based on exclusive data from the International Air Transport Association (IATA), which maintains the world’s largest and most accurate database of travel information. The index is enhanced by extensive in-house research.

The US is among the countries holding 5th place on the 2018 edition of the index, improving its visa-free score from 172 in 2017 to 173 in 2018. The Russian Federation, meanwhile, climbed three places to 48th position. China has shown the most growth in North Asia over the past year, moving up 10 places compared to 2017 and now ranking 75th globally.

For the second year in a row, Pakistan, Syria, Iraq, and Afghanistan sit at the bottom of the Henley Passport Index, each able to access 30 or fewer countries visa-free.

Dr. Christian H. Kälin, Group Chairman of Henley & Partners, says the need for visa-free access is greater than ever. “Across the economic spectrum, individuals want to transcend the constraints imposed on them by their country of origin and access business, financial, career, and lifestyle opportunities on a global scale. The Henley Passport Index shows individuals where they lie on the spectrum of global mobility, revealing the strength that their passport has in relation to other passports,” he says.

The biggest movers in this year’s index were Georgia and Ukraine, which completed the visa-liberalization process with the EU in 2017 and gained access to 30 and 32 new countries, respectively. Georgia was the highest individual mover, climbing 15 places, while Ukraine ascended 14 ranks. China, Sierra Leone, Guinea, the Dominican Republic, and Indonesia also performed strongly this year, each gaining seven or more places compared to 2017.

On the other end of the spectrum, 14 countries — Cyprus, Trinidad and Tobago, Sweden, Spain, Greece, Lithuania, Taiwan, Iran, Bangladesh, Nepal, Yemen, Antigua and Barbuda, North Korea and Syria — fared equally poorly in terms of downward movement on the index, all losing one place year-on-year. New Zealand descended the most but fell by only two places.

Over the past 10 years, the UAE has climbed an impressive 28 places on the index. The UAE passport, ranked 33rd in the 2018 edition, offers visa-free travel to 133 countries — up from 121 countries in 2017. Meanwhile, Afghanistan, Iraq, Syria, and Pakistan occupy the bottom four places on the index. Syria dropped one place from 2017, now offering its citizens visa-free travel access to just 28 countries. Iran has managed to improve its rank over the past decade, escaping the bottom four rankings in the 2018 edition.

Countries in Southeast Asia have remained stable. Offering visa-free travel to 176 countries, and ranked 2nd globally, Singapore remains the best-performing country in the region, achieving its highest ranking on the index in 10 years. Malaysia ranks 2nd in the region, and 12th globally, with Malaysian nationals enjoying visa-free access to 166 countries. Indonesia moved up the ranking by seven places and is now ranked 72nd globally, having signed visa agreements with countries such as Qatar and St. Kitts and Nevis in 2017.

North Asian countries performed well on the 2018 Henley Passport Index, with both Japan and South Korea retaining their positions in the top 10. With visa-free access to 175 countries, the Japanese passport moved up two places to rank 3rd globally (a position shared by seven other passports). South Korea also moved up by two places to occupy 5th place, offering its citizens visa-free access to 173 countries. China has shown the most growth in the region over the past year, moving up 10 ranks to 75th place on the global ranking.

The Russian Federation is ranked 48th overall, but the country has fallen to 2nd place within the Commonwealth of Independent States, sharing this position with Moldova. Ukraine has climbed 14 places since 2017 and now occupies the top spot in the region. The Ukrainian passport is ranked 44th globally, providing visa-free access to 114 countries. Georgia is the highest climber both in the region and globally, moving up 15 places compared to 2017 and now occupying 53rd place overall. With a visa-free score of 50, and ranked 85th globally, Turkmenistan has the lowest level of travel freedom within the Commonwealth of Independent States.

In the Caribbean, several countries showed improvements on the 2017 results. St. Lucia, St. Kitts and Nevis, and Grenada added three additional countries to their 2017 visa-free lists. St. Kitts and Nevis also climbed two places in the 2018 edition of the index, now ranking 4th in the region and 28th globally. The Dominican Republic was the highest regional climber, ascending seven places on the 2018 Henley Passport Index to secure the 73rd position on the global ranking. All countries in the region excepting Antigua and Barbuda and Trinidad and Tobago improved or maintained their visa-free score year-on-year.

“There is no denying that a global mobility divide exists,” says Dr. Kälin. “We are also seeing a growing tendency towards a more isolationist, immigration-hostile policy among traditional migrant-receiving countries such as the US, and 2018 will bring further uncertainty, with the UK still in the grip of ongoing Brexit negotiations. Nonetheless, only a small minority of countries on the Henley Passport Index lost visa-free access in 2018. By and large, countries either improved or maintained their access compared to 2017. These findings reflect the fact that, while certain countries are tightening their borders, most are in fact becoming more open, as they seek to tap into the immense economic value that tourism, international commerce and migration can bring.”

Investment migration is the most direct route to improved mobility

More governments than ever before are embracing residence- and citizenship-by-investment programs as a means of stimulating economic development and growth, and an increased number of wealthy and talented individuals are looking to diversify their citizenship portfolios to give themselves and their families greater international opportunity, travel freedom, stability, and security.

Dr. Kälin points out that the countries that offer the most credible citizenship-by-investment programs in the world consistently perform strongly on the Henley Passport Index. “Malta, for example, offers the top-ranked investment migration program globally, and the country also scores very highly on the index, holding the world’s 9th most powerful passport and offering visa-free access to 169 countries,” he says. “Austria also makes it into the top 10, with access to a total of 174 countries. Cyprus is not far behind in 17thplace, with 159 countries accessible visa-free.” Caribbean countries offering citizenship-by-investment programs have likewise performed well on this year’s index.

“Alternative citizenship represents the most direct route to global mobility, connectivity, and access. Individuals who have multiple passports benefit from each country’s best practices and are less vulnerable to its risks and shortcomings. The Henley Passport Index is relevant to anyone seeking to strengthen their level of access as well as to governments trying to understand their passport power in a global context,” concludes Dr. Kälin.