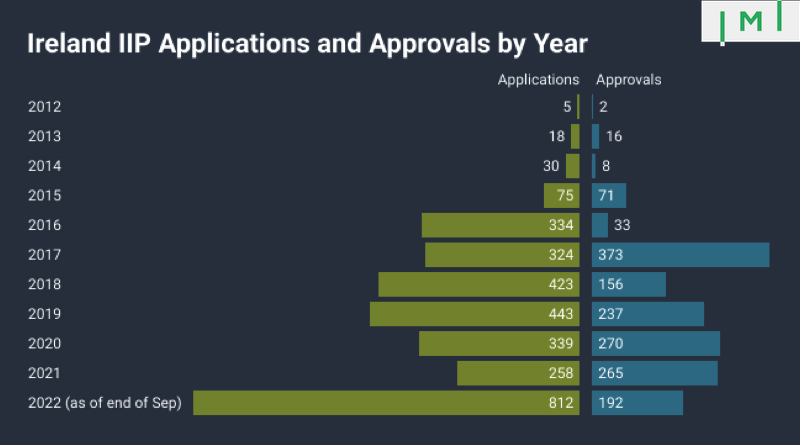 In the first nine months of the year alone, Ireland received 812 applications for its Immigrant Investor program. The figure already represents a 215% increase compared to the 2021 total and is 83% greater than the previous annual application volume record, set in 2019. If the monthly rate of applications continues along this trend for the remaining three months of the year, Ireland will see total volume more than quadruple year on year.

While application volume has already shattered all previous records, there is little to indicate Ireland's Department of Justice has responded with a corresponding increase in processing capacity. Indeed, it had approved only applications during the same nine-month period, a level of productivity largely in line with previous years but one that will no doubt engender a considerable processing backlog if not sharply augmented in the coming months.

Largely unchanged processing capacity means that although application receipts numbers are setting astonishing records, this expansion has yet to translate into a parallel acceleration of actual investment, capital that is only injected into Ireland after application approval. Two-thirds into 2022, the program had recorded EUR 132 million in investment, implying full-year 2022 total investment of a level similar to the last two years.

Considering that Ireland IIP participants invest an average of EUR 730,000 through the program, the 812 applications filed this year - presuming a 90% approval rate - would equate to investments worth about EUR 534 million. To put that figure in perspective: It would amount to about 50% of total historical program revenue from 2012 to now - all from a single year's worth of applications.

Most (60%) of the investment so far attracted has come in the form of Enterprise investments, while the Investment Fund option accounts for about a fifth.

By the end of last year, Chinese investors accounted for 89% of all applications. That already-dominant position in the program has been further solidified this year; the Chinese now account for 1,511 of the 1,613 approved applications, or 94% of the total. A very distant second, Americans make up 31 program participants, followed by Vietnamese (12 approvals), Saudi Arabians (5), and South Africans (4).