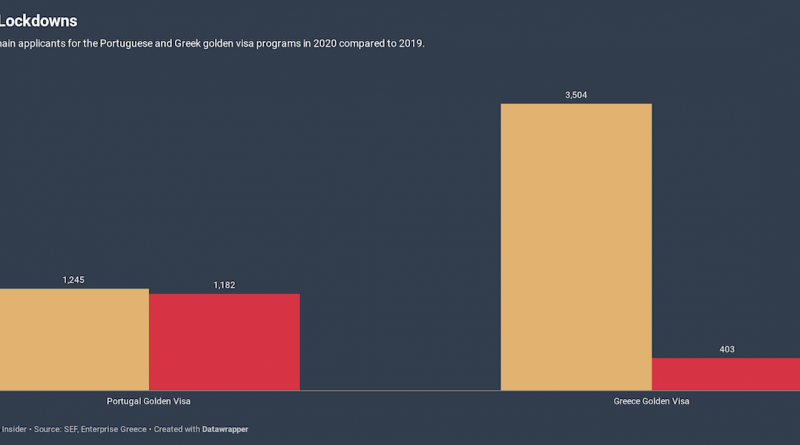 The Greek golden visa program approved just 403 main applicants and 635 dependents during 2020, according to statistics published this week.

That figure has – strangely – moved up and down throughout the year because of the Ministry of Migration Policy’s by-now customary retroactive adjustments to historical approval data. In the July statistical release, 375 main applicants had received approvals during the first seven months of the year; by September, the reported number had actually shrunk to 368. As of the most recent release, dated January 5th, the final tally for 2020 stood at 403, but this will doubtless be subject to revision in the next statistical report.

The 403 main applicant approvals during 2020 represent an 88% decrease from 2019, when Greece approved 3,504 main applicants. It also implies that only 35 additional golden visas were issued in the last four months of 2020, dashing hopes for a Q3 and Q4 resurgence in approvals that many stakeholders had expected following a series of rationalizing measures introduced by the government in response to the crisis. These included the possibility of submitting biometric data at a later stage, waiving requirements for in-person applications, enabling application by proxy, a variety of tax incentives, and several other measures aimed at cutting red tape to “jump-start the golden visa program after the pandemic.”

Laboring under a global crisis that has sealed borders and closed offices, Greek bureaucrats might have been excused for not maintaining their erstwhile processing capacity, were it not for the starkly contrasting performance of their Portuguese peers.

Hampered by precisely the same extenuating circumstances, Portugal’s golden visa has not seen a corresponding drop in investment and approvals. This week, IMI reported that approvals under that program in 2020 fell just 5% shy of those recorded in 2019.