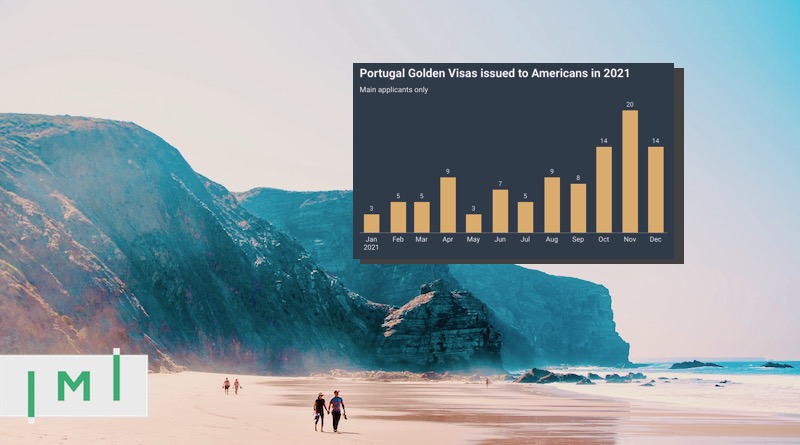 84 investors and 98 of their family members received Portugal Golden Visas during December, a figure roughly on par with that of November. In 2021 as a whole, 865 main applicants received approvals. That represents a decline of 27% from 2020 and the lowest main applicant approval number recorded for the Portuguese golden visa since its annus horribilis of 2015.

The concurrent rise in popularity of the cheaper routes to qualification offered by "alternative assets" (any investment option outside the standard EUR 500,000 real estate investment) explains much of the decline in average per-applicant investment. 41% of investors in 2021 opted for alternative investments, up from 33% in 2020 and just 11% four years prior.

Among alternative assets, the investment fund category has seen the greatest relative expansion in recent years; approval volumes under this option have grown by a full order of magnitude in just two years, both in terms of the number of approvals and euros invested.

In absolute terms, however, the largest alternative category remains the "fixer-upper" category (subparagraph 4), which in 2021 accounted for some 28% of all investment in the program, up from 26% in 2020.

China returned to its lead as the number one source country for golden visa investors in December following its brief displacement by the US in November, a program first. But even in December, Chinese investors only barely outnumbered Americans, by 14 to 13 approvals.

Americans have by now become a staple in the monthly top-five nationalities list. More Americans than ever before received approvals last year: 102 in total, up from 75 in 2020 and 65 in 2019. Beyond merely rising year-on-year, the prevalence of American participation in the program also rose throughout 2021; while 32 Americans received golden visas in the first half of the year, 70 of them did so in the latter half, hinting that the American presence in the program could become even more pronounced in 2022.

On a proportional basis, the rise in Americans is further pronounced. US applicants represented nearly twice as big a share of program participants in 2021 as during the preceding year.

One factor in the sharp relative rise in US participation is the corresponding decline in interest from China, the program's primary source of capital. Though the Chinese represented a bigger share of the total in 2021 than in the preceding year, the absolute number of Chinese participants fell from 297 to 270.

A great deal of interest will be attached to how the balance of investment categories changes in 2022 now that the program's reforms have taken effect, drastically altering the terms for several qualification routes. One of our most popular articles this year - Portugal’s Golden Visa After 2021: The Market’s Next Growth Areas - offers a number of qualified guesses as to what's in the cards for the competing investment categories. We also encourage readers to listen to our most popular podcast episode ever: Will Next Year’s Price Change Kill Portugal GV’s Fund Investment Category?