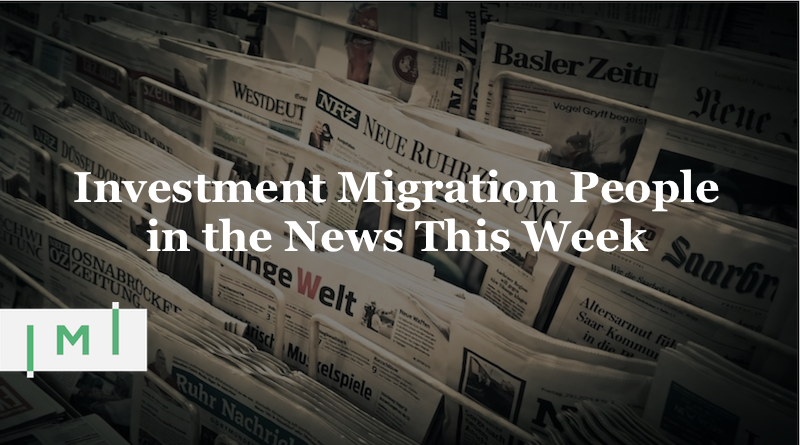 In India tightens rules on tax residency in crackdown on wealthy evaders in The National, Mohammed Asaria of Range Developments comments that India’s new tax rules have set off alarm bells among non-resident Indians.

“Many are worried about the risk of citizenship-based taxation,” says Mr Asaria.[…] “Many NRIs have come to us looking to obtain a second citizenship, renounce their Indian passports and obtain an OCI [overseas citizen of India] card,” he says. “We have a person walking into the office every day [since the budget was announced].”

In Golden Visa program slows down as travel gets tough in Ekathimirini, Alexander Risvas of Risvas & Partners highlights how the Greek program is receiving markedly fewer applications since because of the virus’ spread.

“There is certainly a slowdown in applications for residence permits, due to difficulties in transport mainly for investors from China, as well as from the Middle East now.” He estimates that unless there is an explosion of the coronavirus in Greece as well, the slowdown in the Golden Visa program in 2020 will mainly affect the first half of the year, with a gradual impact on all property transactions.

In Coronavirus pandemic: H-1B renewals, stamping to take a hit as IT clients in US tackle COVID-19 crisis, in Money Control, Pankaj Joshi of EB-5 specialist Nysa Global says visa interviews are being canceled left and right.

“We have several more lined up in the next 30 days and do not know what to expect,” he said and added that the investment advisory firm is expecting processing delays. Most immigration lawyers point out that the situation is very similar to what happened back in the 2008 global economic crisis. “It took three years for the situation to return to normalcy then. But unlike then there is no clarity on how long the situation will last. So we are all bracing for unprecedented impact.”

In Citizenship by investment: striking the right balance, from Cyprus Mail, Christian Kälin of Henley & Partners and Elias Neocleous of Elias Neocleous & Co LLC talk about how the public discussion around citizenship by investment has moved beyond outright opposition and toward a more sensible discussion around how to properly regulate the market.

Group Chairman of Henley & Partners Christian Kaelin, introduced at the high-level gathering as “the passport king”, said: “At the start things were overly lax and now there has been an overreaction.” This was “concerning”, he said. “The trend is very clear – there has been a shift in international opinion and the discussion is now about sensible regulation.”

Chairman of the Board Elias Neocleous & Co LLC Elias Neocleous, one of the event’s main speakers, agreed. “For the EU, the issue is delicate – concerns have been raised over possible risks such as tax evasion and the European Commission does not agree with the commercialisation of passports,” he said. “Critics say the risks of the Cypriot programme have not been addressed appropriately.”

In Vanuatu’s controversial citizenship for sale program under scrutiny in lead up to election on ABC Radio Australia, Christian Nesheim, editor of Investment Migration Insider, doubts whether a change of government in Vanuatu would lead to the closure of its citizenship programs.

“What we see a lot is that political parties in the opposition tend to criticize the government for their handling of the citizenship by investment program but, when there is an election and the opposition does come in, what we also often observe is that, suddenly, they are able to live with the program.”

And, Mr. Nesheim says, when it comes to Vanuatu, many of his readers believe that the option to buy citizenship will be there long after polling day on March 19th. “There will always be an element of uncertainty as to what’s going to happen to the program after a change of government. More likely than it being scrapped is that they will improve upon it but keep it going because politicians don’t like giving up 37% of their budget.”

A Tale of Two Citizens: Virtual vs. Functional Freedom of Movement

April 9, 2020 Editor Comments Off on A Tale of Two Citizens: Virtual vs. Functional Freedom of Movement
Editor's Picks Intel & Data

April 5, 2020 Editor Comments Off on 51% of Service Providers Think Small-State CIPs Will Offer Discounts in Response to Pandemic
Editor's Picks

10 On The Weekend – Alexander Varnavas: “Real Estate is The King in This Industry”

April 4, 2020 Editor Comments Off on 10 On The Weekend – Alexander Varnavas: “Real Estate is The King in This Industry”
Ten On The Weekend

March 7, 2020 Editor Comments Off on 10 on The Weekend – Angie Rupert: “My Business Model is Narrow; I’ve Picked a Niche”

Weighed Down by Pandemic, Investment in Portugal’s Golden Visa Falls to 21-Month Low