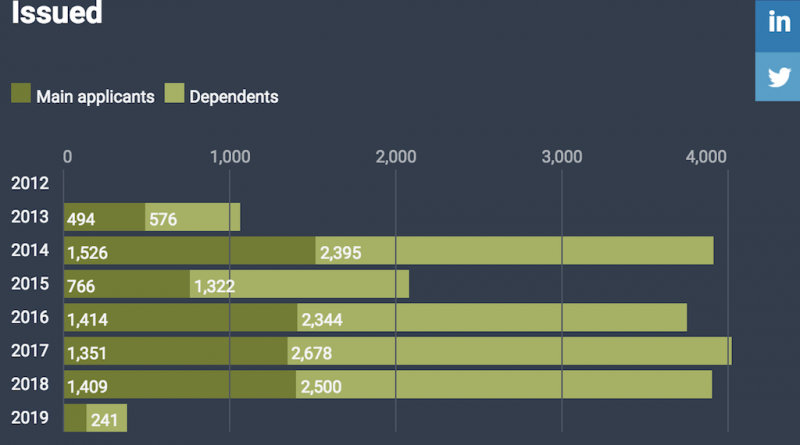 January figures from SEF show Portugal’s Golden Visa program is continuing the upward trend its started last summer; 146 main applicants – and 241 of their family members – invested 85.6 million euros in the West-Iberian economy in the first month of the year. That’s an average of €586,000, well above the minimum.

Should each month in 2019 be as good as January, Portugal would see its own annual records for both investment and visas issued surpassed by some 24%; on an annualized basis, 146 monthly approvals comes out to 1,752 a year, a great deal more than the 2016-record of 1,411 annual approvals.

All told, the program has thus far brought investments worth €4.35 billion – 91% of which has come in the form of real estate acquisitions – with average investments amounting to €610,000.

While still the leading applicant group – by some distance – Chinese nationals have seen their share of total existing golden-visa holders fall precipitously over the last four years; whereas the tally in January 2015 showed they constituted four out of five visa-recipients, their proportion has by now dropped to 58%. By all accounts, that share still has some way to fall; of the 146 approvals granted in January, only a little more than a third – 54 – went to Chinese investors.

Turkish fondness for Portuguese residence permits, on the contrary, is on the upswing. Only entering into the top five nationalities in 2018, Turks have already leapfrogged past South Africa and Russia to become the third biggest investor constituency.

See more figures on global residence and citizenship by investment programs in our Data Center.