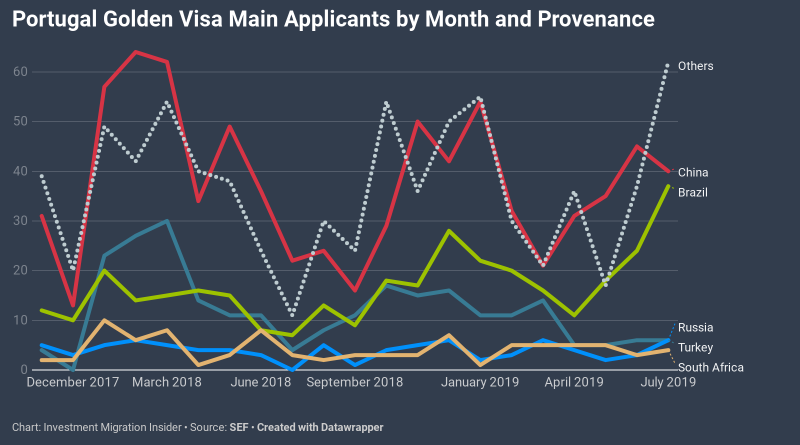 Not since March 2018 has the SEF approved more applications in a single month than it did in July. Investing a combined EUR 98.3 million, 155 main applicants received their residence permits during the month.

Never before have so many Brazilians participated in Portugal’s Golden Visa program; at 37 approvals in July, Brazilians were second only to the Chinese (40). Turks, Brazilians, and South Africans accounted for six, six, and four applications, respectively.

In aggregate, however, China’s lead appears unassailable; at 4,331 investors, Chinese investors still outnumber applicants from all other countries combined. But Chinese dominance has waned since the early years; as recently as 2015, eight out of ten participants were Chinese.

One notable departure from the norm was observable; whereas the capital transfer option generally accounts for 10% or less of total investment, that share doubled in July.

So far in 2019, 776 main applicants with 1,293 family members have obtained residence permits through the program.

Hundreds of companies can assist with applications to Portugal’s Golden Visa program. To see which ones, visit the Residence and Citizenship by Investment Company Directory.