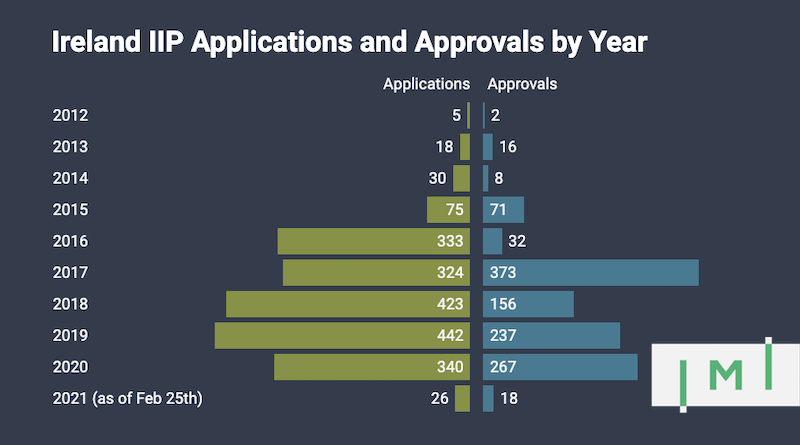 Ireland’s Ministry of Justice recently provided a rare glance into the Irish IIP’s application, approval, and investment data, the first such release since 2019, which also contained a number of revisions of the data from previous releases. The figures show that, although the number of applications received in 2020 fell by 23% (from 442 to 340) from the preceding year, approval volumes rose by 13% (from 237 to 267), the second-highest number of approvals in a calendar year on record.

In aggregate since the program’s launch 11 years ago, 2,016 investors had submitted applications by February 25th this year, of whom only 1,197 have been approved so far. On a cumulative basis, this implies a rejection rate of 41%, although the true figure is likely somewhat lower due to the several months it takes to process applications.

In terms of the nationality distribution of applicants, little has changed since the last statistical update; virtually all approved applicants (93%) were of Chinese origin, while Americans came in at a very distant second with less than 2% of the total.

The favored investment category, between the program’s opening and February 25th this year, has been the Enterprise Investment option, which accounts for 56% of the total so far, followed by the Endowment (26%) and Investment Fund (14%) options.

The last two years, however, have seen applicants change their investment preferences; in both 2019 and 2020, the Endowment option was the more popular, accounting for about half of all applications in both years.

Total investments raised through the program fell only slightly in 2020 compared to the year before, from EUR 209m in 2019 to EUR 185m last year. All told, the program inches ever-closer to the billion-euro milestone; at the end of 2020, the IIP had brought in EUR 862.5 million, 48% of which – according to figures seen by the Irish Times – has been spent the construction of social housing and nursing homes.

If you enjoy our Data & Intel articles, you’ll love the IMI Data Center.