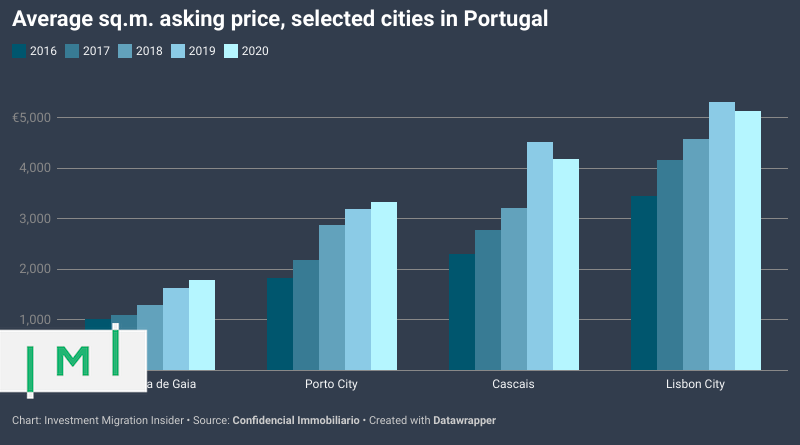 COVID-19 has negatively impacted economies across the world and many real estate markets have seen sharp declines but, for a mix of reasons, the situation has been different in Portugal.

The international community’s significant presence in the country’s investment property market has played an important role in this respect; foreign buyers accounted for 35% of all property investments in the Lisbon area in 2019. While this is partly attributable to Portugal’s high quality of life and affordable property prices, it is Portugal’s successful residency by investment program, the Golden Visa (ARI), that truly underpins this foreign investment boom.

The property market after COVID: Barely bruised – for now

Looking back to the beginning of 2020 and the months immediately preceding the pandemic, the real estate market in Portugal was moving from strength to strength, displaying no signs of slowing down. From 2016 to 2020, in the cities of Lisbon and Porto, average residential asking prices increased by 49% and 83%, respectively. The Algarve also saw an increase in average property prices, climbing by about 50% during the same timeframe.

Portugal’s property market was not left entirely unscathed by the pandemic – in Lisbon city, house prices fell in 2020, albeit by just 3% – but the sector did display remarkable resilience in the face of the largest public health crisis in a century.

On a national level and in key areas such as the city of Porto and the Algarve, prices continued to climb by 4% and 12% respectively. As such, it’s safe to assume that this will continue in the same vein once the short-term impacts of the pandemic are removed.

Mr. Luís Lima, president of APEMIP (The Association of Professionals and Real Estate Companies of Portugal) reinforces this idea, noting that “despite the difficult context, which had repercussions in all sectors of the economy, real estate managed to remain resilient throughout the year, which was also reflected in the dynamics of growth in house price transactions –  the average rate of change of the Price Index of the Housing stood at 8.4%, registering [only] a slight decrease of 1.2% compared to the pace of price growth observed in 2019.”

In fact, despite the dip in prices, 2020 showcased an increase in the volume of real estate investments – the third-highest investment turnover, due to the second and third largest transactions in four premium shopping centers and an office complex, respectively – testifying to Portugal’s property market and investors’ confidence of it prospering regardless of the pandemic.

The risk of known unknowns

Before COVID-19, what placed Portugal in a somewhat unique position was that property prices, though increasing, remained much more affordable compared to most other European countries, in addition to an increased demand for housing.

This has not changed and, therefore, after a bumpy 2020, the real estate market will be looking to bounce back in full over the coming year.

Still, Mr. Luís Lima stresses the unpredictability of the current situation as “it is very difficult to anticipate scenarios, as the dynamics of the sector may somehow be held hostage to the pandemic’s performance. I would say that we will have a year of challenges ahead […] last time we managed to get through the [financial] crisis […] centralizing real estate as one of the main engines of economic recovery that happened more quickly than could have been hoped. This time, if companies and people (with regard to housing credit) are allowed to survive, we will do it at ‘lightning speed'”.

What’s more, globally renowned real estate service provider, CBRE, has published forecasts that indicate that Portugal’s GDP should fully recover by the end of 2022 to 2019 levels although the pandemic situation means many uncertainties remain to be addressed.

This unpredictability in the current climate is compounded by anticipated changes to the Portugal Golden Visa scheme, which will kick off on the 1st of January 2022.

In terms of real estate, the “hotspots” of the country will no longer be on the golden visa map, except for some commercial and non-residential real estate. It is worth noting that the autonomous islands of Madeira and the Azores will remain eligible for the scheme.

The upcoming changes will be applicable to the big cities, such as Lisbon and Porto, and coastal regions, including the much-loved Algarve. The thought process behind the change in policy is that it will instigate foreign investment and development in the countryside.

The changes to the golden visa in itself adds a further layer of uncertainty, in that we do not yet know how the changes will impact the influx of foreign investments into the real estate market.

Rafael Sena, Real Estate Manager at Goldcrest, an independent property buyers service, expects that due to the changes to the golden visa, we will see “a significant increase in demand for properties in low density areas, as well as a greater offer of projects”.

This indicates that, although the changes will clearly have an effect on the real estate market, changes may spur developments in lesser-known parts of the country and significantly widen the scope of property investments across Portugal.

Portugal’s investment growth is perhaps best illustrated by highlighting real estate investments over the past 12 years, where investments have risen threefold from 2008 to 2020, and which is strongly influenced by foreign sources.

The real estate sector in Portugal is increasingly outward-looking in welcoming expats and foreign investors, as evidenced by the adoption of the tax-friendly non-habitual resident (NHR) scheme and the golden visa, which, since its adoption nine years ago, has become one of the most popular in Europe.

Patricia Casaburi has an LLB from the University of Law, in London and her specialties include legal lead liaison in commercial law and immigration. With an added bonus of a bachelor degree in media studies and journalism, she built expert sales and operations teams, with knowledge of the best communication practices.

As a Brazilian national, with Italian and Lebanese grandparents Patricia knew from an early age what it meant to be global. Patricia worked in London in account management for an international group before founding Global Citizen Solutions.

Patricia speaks Portuguese and English and has a good understanding of Spanish and French.