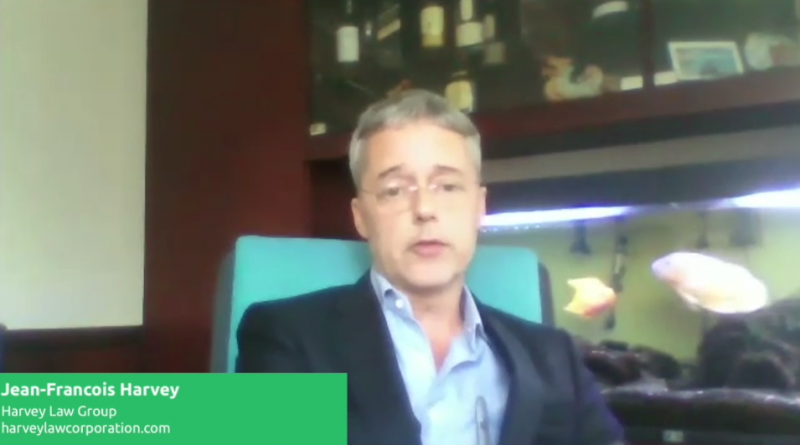 This video is the third in an IMI Club exclusive series of interviews with investment migration personalities, centered on questions surrounding the direction the market will take following COVID-19. To see Episode 1, with Andrew Henderson of Nomad Capitalist, and Episode 2, with Eric Major of Latitude, click here.

“COVID-19 will become an advantage for the industry, as one more argument for why you should get another residency or citizenship,” says Jean-Francois Harvey, Global Managing Director of Harvey Law Group, in an IMI Club exclusive interview.

Hong Kong inquiry bonanza: “This time is different”
In a conversation that covered a wide range of topics, one subject that stood out was Hong Kong’s new national security law and the effects it’s having on the investment migration market. Headquartered in Hong Kong for decades, HLG has witnessed first-hand the fluctuations of interest in RCBI programs among Hongkongers, and how that interest tends to peak during times unrest only to fizzle out once things calm down.

Harvey has called this “emotional inquiries” that die down when the client realizes the effort and cost involved in investment migration. This time, though, he admits, is different, but not for the reasons one might expect.

Harvey explains that while they did see a rush of inquiries following the introduction, the real deluge only came once it became clear the United States might withdraw trade privileges.

“What is very interesting, and something we’ve seen in the last five-six days [since the announcement of the national security law] is that the consequences of the potential withdrawal of some privileges, as the US has announced it may withdraw some trade-related privileges,” points out Harvey. “This is touching the nerve of the HNWIs in Hong Kong. This is touching the possible devaluation of the Hong Kong Dollar. This is touching the real estate values in Hong Kong. And the quality of the inquiries we’ve been getting over the last several days is totally different from what we got a week ago. “

Now, explains Harvey, it’s not just the main applicant himself calling, but the clients’ financial advisors.

“The big four are calling us and saying their client has decided they need a plan B, asking what do they do next. They are ready to sit down and make a plan now.”

This is happening, he says, because it was only when the HNWIs of Hong Kong started realizing they might get impacted “where it hurts the most; their assets,” that the ready-to-go-now, UHNWI-advisors began calling.

These types of inquiries come from people who often already have B(NO) passports and perhaps European passports. “Their first question isn’t where to go; the first question is ‘what is my tax position if I go there?'”

What surprised him the most, he comments, was “the quality of inquiries and the number of inquiries we now get from what we call the ‘highly sophisticated’. We’d usually get one to three of these a week, and now the phone doesn’t stop. And when they call, they don’t want to speak on the phone, they just want to find out where they can meet us.”

Two new CIPs coming online in 2020 “for sure”
Piquing the interest of industry observers the most, however, will be what Harvey had to reveal regarding new citizenship by investment programs.

“Right now, we are working with three different countries who want to create their own citizenship by investment programs. Those are countries that didn’t think much about CBI before and so the mandates are new. I’m talking less than 90 days ago. That’s partly as a reaction to COVID-19, partly as a reaction to the state of their national finances. So, I believe the offering on the market will just expand. COVID-19 will help a lot of governments to justify the decision to open a CIP.”

Pressed as to how far along these new CIPs are in terms of planning, Harvey says “I can tell you two or three of them will be coming online this year. We’re already very far advanced and, because we’ve been doing government advisory for several years, we have a ‘package’ ready.”

He adds that, while for one of the countries a constitutional change still needs to take place, two of them will be opening in 2020 “for sure” and also guarantees that they will be “very competitive with any of the programs in the market right now”.

Harvey goes into greater detail about the three new CIPs, how they will be structured in terms of donations versus investment, how concessionaires will be selected, as well as how they might be priced in the IMI Club Members’ exclusive interview.