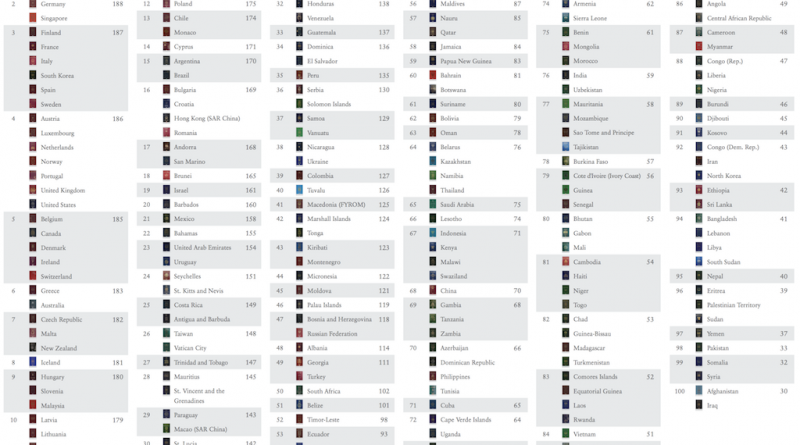 Henley & Partners last week issued a second-quarter update on its Henley Passport Index, showing Japan is now alone at the top of the table for number of visa-free destinations, narrowly beating Singapore and Germany. While Japan’s ascent to pole position is perhaps not remarkable, it’s interesting to note how a global trend in mobility is being catalyzed by a very rational desire, among a wide variety of countries, for tourism-related revenue.

The United Arab Emirates is a great example:

Leading global efforts towards improved travel freedom is the UAE, which has gained access to eight new countries in 2018 alone: China, Ireland, Burkina Faso, Uruguay, Guinea, Tonga, Benin, and Honduras. The country’s reciprocal agreement with China in particular has led to the Emirati hospitality and tourist industries reporting growth of up to 70% compared to 2017, as Chinese travelers begin taking advantage of their newfound access to the Middle East’s main hub. The UAE Ministry of Foreign Affairs said recently that the country is actively strengthening its diplomatic efforts in a bid to have one of the top five passports in the world, as per the country’s Vision 2021.

Ryan Cummings, Director of Signal Risk and a leading commentator on the MENA region, confirms this sentiment: “The visa-waiver agreements signed by the UAE to date are very much in line with the country’s ongoing intention to position itself as the foremost commercial hub in the Gulf Cooperation Council (GCC) zone, where it is increasingly hosting the regional headquarters of multinational firms operating in culturally diverse industries such as healthcare, professional and financial services, and digital technologies. These developments also reflect the country’s publicized goal of shifting its economic dependence away from the extractive industry towards the tourism sector, where it aims to create an ambitious 720,000 employment opportunities by 2028.”

Qatar, having been given a cold shoulder by its GCC neighbors over the last year and suffering for it, has gone to great lengths to pivot away from oil-related revenues and towards income from visitors with a more agnostic stance toward the Sunni-Shi’ite schism.

Economic diversification away from the oil sector and towards the less volatile tourism industry has in fact become a common theme across the GCC zone. Cummings explains: “Qatar extended a visa-waiver program to more than 80 countries in the final quarter of 2017, and the country has continued this trend in 2018, as part of its aim to attract 8 million tourists annually by 2030. Saudi Arabia, too, issued inaugural tourist visas on 1 April this year, seeking to secure its own target of 30 million tourists by 2030. Bucking the trend in the GCC, however, is Oman, which withdrew the universal issuance of visas-on-arrival in March 2018. Visitors from all except a few select countries will now have to apply for an e-Visa via the Royal Oman Police website before traveling to the area.”