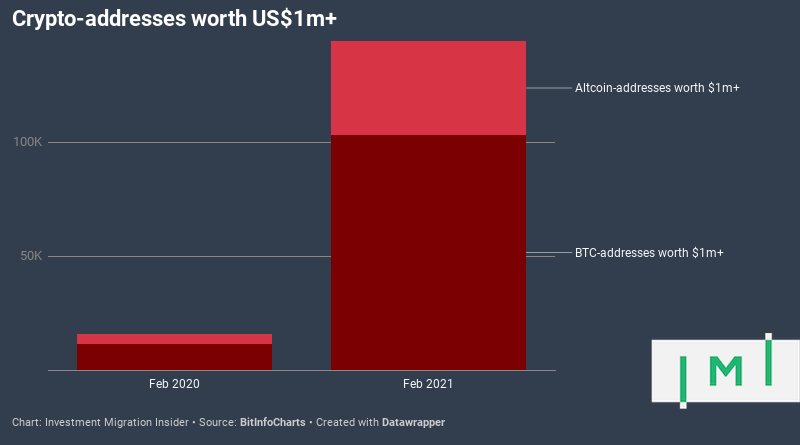 You’re a 20-something recent graduate, just starting out in your professional career with barely a nickel to your name and a starting salary of $30,000. Listening to a podcast on your lunch-break, you hear about something called cryptocurrency, a new technology that promises to liberate humanity from the yoke of central banking and fiat money. “Tall order,” you sardonically conclude at first. But maybe – just maybe – it could work if enough people bought into the idea. You decide to look into it.

Over the course of two weeks of research, you gradually come to the realization that this new technology really is revolutionary. Some luminary has created a new form of reserve currency that is more limited, durable, portable, and fungible than even gold. You learn that there will never be more than 21 million bitcoin.

Having only recently started your career, your savings account has only a modest balance of $5,000. In a few years, you reflect, that won’t seem like such a big amount. Furthermore, you reason, the only way to create a large fortune in a single generation is to take large risks. You have nothing to lose except $5,000. You are young; you’ll make it back.

So, you cast the proverbial die.

You convert the entirety of your savings account to bitcoin. 20 of them, to be precise, as that’s all your pitiful account balance will permit.

For the next six years, you do nothing about your bitcoins. Instead, you focus on building a career, the contributor to your net worth over which you have the most control. The price movements of virtual money, after all, have an external locus of control; no use focusing on what you can’t influence.

Windfall
One Sunday morning in February 2021, as you’re browsing Twitter from your bed, a headline catches your eye: “Bitcoin Price Hits Historic $50,000”. At this moment, it dawns on you.

You are a millionaire. You are a High Net Worth Individual. You are the 1%.

More importantly, you were right. The series of letters and digits that the “experts” said was “based on nothing” and of utility mainly for money launderers and drug dealers have catapulted the value of your portfolio by 19,900%. Your banker uncle, who in 2015 disabused you of your youthful naïveté and sophomoric ideas of the future of currency by patiently explaining “how money works in the real world” now has to sit through company-mandated crypto seminars.

The politicians, at first, ignored crypto. Then they laughingly dismissed it as not being “real” money. Then they tried to fight it with laws. But now, finally, crypto is winning. The very same institutions that financed the politicians’ campaigns are converting parts of their cash-equivalents to bitcoin and ether. The “power behind the power” now has skin in the crypto game, which means the politicians they sponsored (the public face of power) will not try to kill the technology.

Now that politicians, despite their best efforts, must begrudgingly acknowledge that crypto is real, valuable, and here to stay, they want their “fair share”. They took no risks with their savings accounts but they want a sizable chunk of your gains nonetheless, usually in the form of capital gains tax and sometimes even VAT.

Prior to 2017, your net worth had never exceeded $20,000. Now, you could sell your crypto for a million dollars but, if you do that, you’ll have to part with several hundred thousand dollars (depending on where you are a tax resident), more money than you have ever made in your day job. If the price of bitcoin grows ten-fold again within the next five years, you’ll have to part with millions of dollars in capital gains tax.

Salvation
But there is, you learn, an alternative. The tax authorities of many countries around the world, including some large and advanced ones like Germany, Portugal, Switzerland, and Malaysia have decided to treat cryptocurrency as, well, currency, rather than as a commodity or security, which means you can buy and sell it without paying taxes.

To enjoy those tax benefits, you come to understand, it will be necessary for you to actually move to another country and become a tax resident there. If you’re an American (which many of the newly minted crypto-millionaires doubtless are) you’ll additionally have to give up your citizenship to fully extricate yourself from tax obligations on your crypto earnings, and you must do it before the balance of your account exceeds $2 million as, otherwise, you’d need to pay an exit tax upon tax emigration.

In brief, you’ll need a residence permit in a country that doesn’t tax crypto earnings and (if you’re an American) another citizenship as well. And you need it yesterday.

In many cases, that means you’ll need the services offered by the fast-growing investment migration industry.

And that only counts bitcoin addresses. We don’t know exactly how many alt-coin addresses are worth a million or more but, for the last few years, BTC has made up between 50 and 70 percent of aggregate cryptocurrency market capitalization. If we assume BTC dominance at 60%, then, using bitcoin as a proxy, we can estimate that the number of alt-coin accounts worth a million or more is about 40% of the equivalent number for BTC. That would imply that there are roughly 144,000 million-dollar-or-more crypto accounts overall.

One crucial metric that investment migration executives consider when deciding on which markets to focus their marketing and expansion plans is the number of HNWI residents. If Crypto were a country, its HNWI population would rank 29th in the world, just behind Saudi Arabia and ahead of Israel.

And that is just today. If the price of bitcoin goes up by another order of magnitude in the next few years, we’ll have million-and-a-half crypto millionaires, a HNWI population greater than India, the UAE, and Hong Kong combined.

Many of these crypto-millionaires will have a story similar to the one described above: For the first time in their lives, they have some serious shekels, and they’re not about to just hand over a quarter of it if there are alternatives. Thanks to investment migration, there are alternatives. These overnight millionaires have upwards of 80% of their portfolios allocated to crypto and can trade it from anywhere. They’re not tied to any particular geographic location.

Investment migration firms that can provide viable solutions for this demographic stand to benefit tremendously, especially if they can structure products that resolve the typical challenges these crypto-millionaires have.

The challenges idiosyncratic to crypto-millionaires include:

The crypto-millionaire segment will become an enormous market unto itself. Start preparing today.