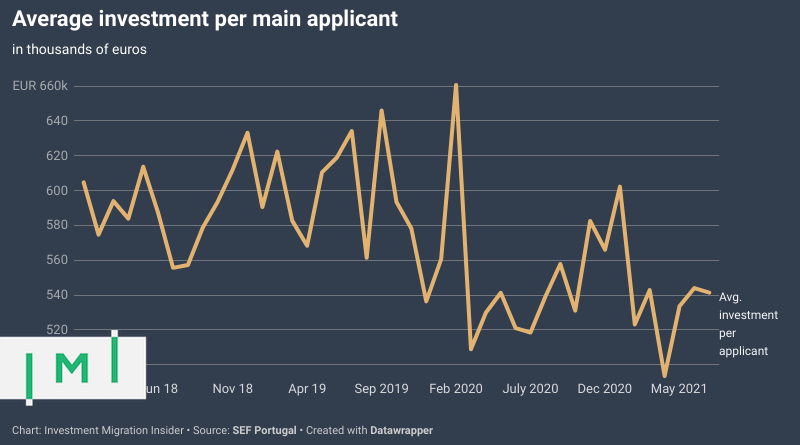 In July, the SEF approved only 41 main applicants for golden visas in Portugal. That’s down from 67 last month and 108 in July last year. The approvals resulted in total investments of EUR 22.2 million, another record low.

As is the custom, Chinese applicants represented the largest investor contingent also this month, accounting for roughly one in four investors. Americans, meanwhile, once more made the top five nationalities in the monthly tally, which they have done for 12 of the last 13 months. If American interest in Portugal's golden visa continues unabated for the next year, they are poised to unseat Russia for a spot in the all-time top five.

Year-to-date, the golden visa program has raised EUR 260 million from 486 main applicants. Extrapolated to the end of the year, the figures imply the program will raise some 31% fewer euros in 2021 than it did last year.

What explains the declining approval figures?

A number of factors may be at play. Last month, Lisbon-based golden visa specialist Patricia Valadas Coriel chalked it up to rising interest in Portugal's D7 visa:

"The D7 visa is a residence permit that doesn't require an investment and grants applicants much the same rights as the golden visa," she says. Those include:

Laura Blumes of Empowered Startups, however, postulates that the ongoing restructuring of the SEF is driving a change in the bureau's priorities, a claim she substantiates by pointing to the different receptions golden visa and HQA (highly qualified activity visa) applicants meet at the SEF:

"The upcoming changes to Golden Visa legislation, coupled with COVID closures, worsened the months-long backlog of Golden Visa applications," she says. "HQA applications, however, were among the first to be processed once processing resumed after the COVID shutdowns. The first HQA appointment was scheduled within a week of the re-opening. HQA permits since re-opening have been issued within 30days, within some in as little as 3 days."

Golden visa applicants "being pushed to the back of the line"

To her, this trend is indicative of a new SEF, one that accords preferential treatment to applicants that drive economic growth and job creation in Portugal:

"Portugal’s priorities are clear," she says. "Development in rural areas is favored, and investment that drives innovation is preferred. The HQA program checks both those boxes, so HQA applicants are getting their permits first. Meanwhile, Golden Visa applicants are paying a premium for processing, yet they’re being pushed to the back of the line."

Blumes recounts that several lawyers with whom she works closely have noted that HQA visa applicants appear to be getting appointments much faster than their golden visa counterparts in the aftermath of COVID-closures.

"The SEF suspended all permit appointments (except emergency cases) starting February 12 through to April 19. One of the lawyers had an exceptional Golden Visa appointment rescheduled for April 20, the day after re-opening, but the remainder were rescheduled for July. The other lawyer has not had any of her GV appointments rescheduled; all of the appointments that were suspended due to the COVID closure are still awaiting new dates."

That contrasts starkly with the evidently warmer welcomes granted to HQA applicants, she points out.

I"n contrast, there was one exceptional HQA appointment rescheduled for April 28, and all of the others were rescheduled for May through to mid-June. Every HQA permit was issued within 30 days of the appointment, with some issued in only a few days."

The same lawyers, Blumes maintains, tell her new bookings for the golden visa have been "all but suspended" and that the SEF has not been accepting new appointments since early spring.

"Apparently, SEF was accepting new GV bookings for Aug/Sep/Oct when it reopened on April 19. We’re told those slots filled up within 10 minutes and that the SEF hasn’t made any more slots available since. Again, in contrast, the SEF has been issuing new HQA appointments without interruption since the re-opening."