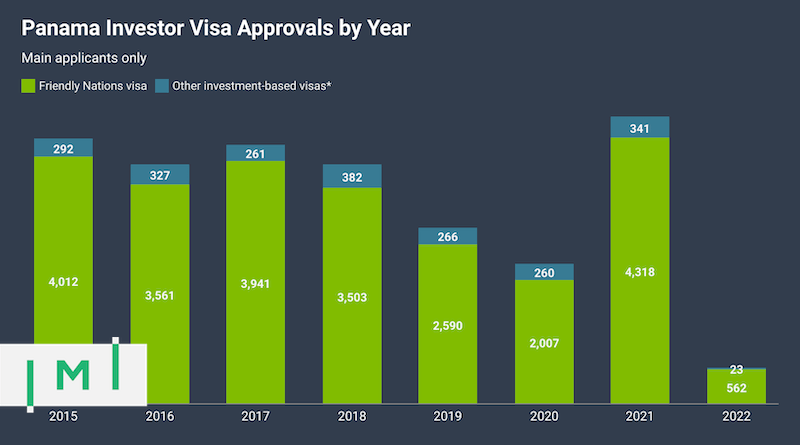 Policymakers in Panama – much like in Singapore, to which the Central American country is often compared – have historically recognized that small, strategically located countries with limited natural resources must invite foreign capital and talent to thrive. As a consequence, Panamanian economic and immigration policy has focused on making the jurisdiction attractive to offshore companies, investors, and otherwise resourceful residents.

Of all the different jurisdictions we cover in IMI, none offer as great a number or variety of immigration routes to enterprising individuals as Panama. Throughout the last decade, the country has operated so many different golden visas, independent means visas, and active investor visas that keeping track has been a challenge.

For example, over the last decade, Panama has administered at least 14 different investment-based visa categories, including:

Investor visas in Panama generally give the applicant the choice between speed and price; invest more, get permanent residency faster. Those happy to physically relocate to Panama have even more options, such as by starting and operating a business in the country, or demonstrating a certain level of income to qualify for an independent means visa, such as the Rentista Retirado and the Jubildo o Pensionado.

The "Solvencia Propia" investor visas - for which applicants can qualify by making a US$300,000 investment in real estate, term deposits, or a combination of the same - grant permanent residency after three years.

In 2021, Panama introduced the Qualified Investor program, which grants immediate permanent residency to those who invest certain amounts in US$500,000 (US$300,000 until October 2022) in real estate or securities, or who deposit US$750,000 with a Panamanian bank.

But of all the various capital-based routes to Panamanian residency, the most popular - by some distance - has been the Friendly Nations Visa (FNV), which - until August last year - was practically free for nationals of 50 countries considered "friends" of Panama:

"The Friendly Nations visa," says Michelle Hammond of Panama-based Offshore Circle, "was introduced by executive decree No. 343 of May 16, 2012, under the presidency of Ricardo Martinelli. It quickly rose in popularity offering a simple, fast, and affordable residency by investment program. Investors were able to obtain permanent residency within six months by simply proving financial solvency and economic ties to Panama, for less than US$10,000, depending on family size."

Though in practice requiring very little in the way of investment, Hammond explains, it was formally always considered an investment-based visa because of the requirement to place at least US$5,000 (temporarily) in a local bank account. "Though not substantial, it was nonetheless an investment," she adds.

"However, in August of 2021," continues Hammond, "under Executive Decree No. 197 of May 7th, 2021, changes to the Friendly Nations Visa emulated more traditional residency by investment programs by raising the qualifying investment to a more substantial amount."

The FNV rules now stipulate that applicants make an investment of US$200,000 in either real estate or a fixed-term deposit, or obtain employment sponsorship from a Panamanian company. Moreover, Hammond points out, FNV-applicants are no longer awarded immediate permanent residency in Panama; they must now undergo a six-month assessment period, following which they (if approved) are awarded a two-year temporary residency. At the conclusion of two years, applicants become eligible for permanent residency.

"For now, if clients are going the real estate route," says Hammond, "the Qualified Investor visa is more attractive [than the Solvencia Propia real estate investment visa] but, in October, it will increase to US$500,000, so depending on their budget, either visa could be a good option. If they prefer a fixed deposit, the Solvencia Propia visa would be a better option as it is a lower amount [than the US$750,000 required for a Qualified Investor Visa]."

FNV statistics for 2021 show that the government's announcement of more demanding requirements for the visa category drove a surge in applications in the months leading up to August, which is when the new rules took effect.

Main applicant approval volume more than doubled compared to 2020, and was also up by 67% compared to 2019, indicating it 2021's performance was not merely a rebound from the pandemic year. Because of the six-month assessment period, the 562 approvals recorded for January this year (which, on an annualized basis, is 56% above even the 2021 figure) indicate the government is still processing much of the overhang from last year's rush.

"Most likely," says Hammond, "the applications that were submitted closer to the deadline were still in processing this year and were getting approved in January and early February. Now that all applications should be approved or denied, we are expecting to see a decrease going forward."

As investment requirements went from virtually nothing to US$200,000, you would expect demand for the FNV visa to crater as soon as the pre-deadline backlog is tackled, some time in March. But on-the-ground observations seem to indicate that this, counter-intuitively, isn't happening yet:

Marcos Kraemer of Panamanian law firm Kraemer & Kraemer says he is still receiving the same number of inquiries for FNV visas now as he was before the changes, despite the now much higher price tag. But Kraemer also comments that he's now receiving more inquiries for other investor visa categories, particularly the Qualified Investor and Solvencia Propia, and Reforestation Investor visas.

The Reforestation visa, for reference, allows investors to qualify for permanent residency in Panama within either three years or a few months, by investing, respectively, a minimum of either US$100,000 or US$350,000.

It now remains to be seen whether uptake for the FNV remains strong in 2022 despite the elevated investment requirement. At a minimum of US$200,000 and a two-year path to permanent residency, the FNV will be competing chiefly with the Solvencia Propia visa (US$300,000 and PR in three years, open to all nationalities), the Qualified Investor Visa (US$500,000 and instant PR), and the Reforestation visa.