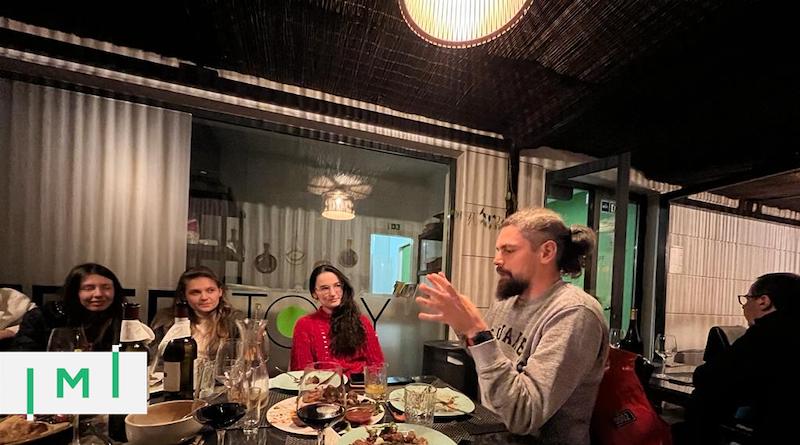 “I was actually in Moscow on a business trip when I found out about the war back home,” says Oksana Iordanova, head of Customer Service at Migronis, who just arrived from Poland the night before.

“My children were in Kyiv,” she continues. “At 6 AM, my eldest son called me and said ‘it started!’. I could hear explosions while on the phone with him.”

Over what’s turned into an impromptu company dinner at a Georgian restaurant in Lisbon, about a dozen Ukrainian team members – several of whom have just arrived in the country – have gathered to exchange hugs, hopes, and harrowing tales of last-minute escapes from the largest war the European continent has seen in generations.

Oksana relates how she could not fly back to Kyiv to get her children out. Remotely, after frantically searching for someone with a car, she was able to organize for her mother to bring her children to the Polish border, while Oksana herself kept looking for flights out of Moscow. Three booked flights resulted in three cancellations as country after country closed off their airspace. Oksana returned to her hotel.

“Remembering that Russia has friendly relations with Hungary, I took a chance and booked an Aeroflot flight to Budapest.”

The plan worked. From Budapest, she was able to fly to Warsaw, and then Krakow, the closest major Polish city to the Ukrainian border.

“At this point, eight hours had passed since my mother and my children had left Kyiv. They told me they were hearing explosions and seeing tanks in the street. They spent the night in a bomb shelter in Rivne [western Ukraine, about 170km from Poland], and then spent four days in a car at the Polish border, waiting to cross. Volunteers provided food and water.”

Oksana eventually reached the Polish-Ukrainian border, where she entered Ukraine to meet her mother and children, whom she eventually accompanied back across the border into Poland again.

“It was a very difficult period for my children,” she adds.

Anastasia Liber, Head of the firm’s Portugal Processing Team and a native of Donetsk, says it took her five days of travel to get herself and her family to Lisbon. Starting out in Kyiv on the day of the invasion, they made their way through Lviv, Pustomyty, Przemysl (just across the Polish border), and Warsaw, before finally boarding a plane to Lisbon. She describes an evacuation reminiscent of a chapter of European history many would sooner forget.

“We spent 16 hours on a train that usually takes an hour and a half. People were practically stacked on top of each other. There was no toilet, we had no sleep, and there was no respect for children or the elderly.”

She praises her children for the bravery they displayed during the escape: “They coped, steadfastly enduring the journey because they realized it was necessary. They are my little heroes. Now we are together and we are safe.”

Her husband, as so many of the husbands among Migronis’ female staff, has had to stay behind to try to repel the Russian invasion.

Terrible as war is, she points out, it has also brought out a lot of good in people. “I want to thank everyone who helped: with words, with actions, with tickets, funds, shelter, food, and water. You are unreal!”

Presiding over the table surrounded by his female Ukrainian staff (his male staff has had to remain in the country) is company founder Anatoliy Lyetayev. He’d rather not speak about the war, he says, because everyone gets plenty of that from their relatives back home and from the news.

Instead, he wants to talk about the circumstances that have allowed the war to happen (“statism and the centralization of power”) and what can be done to mitigate the situation for the expected 10 million Ukrainian refugees now scattering across Europe. Until recently, he explains, most of his colleagues were physically located in Ukraine.

“A month before the outbreak of hostilities, we managed to relocate part of our team to our Lisbon office,” says Lyetayev. “However, unfortunately, some of our colleagues are still in Ukrainian villages, cut off from any possibility of evacuation as the bridges and other infrastructure has been blown up.”

Since the beginning, his firm has catered chiefly to the Russian-speaking market. An absolute majority of the company’s clients have so far been Russian nationals, Lyetayev, points out.

“Despite that,” he says, “we have decided to stop working with this market and we have closed our office in Moscow, just as most other Western companies now have. We expect to incur significant financial losses from this decision.”

For now, he is turning his attention toward assisting his countrymen.

“We are about to launch a project to help the Ukrainian refugees, of which there are already millions in Europe. It’s a scale of internal European refugee movements we haven’t seen since WWII. I would be very glad to see other industry companies support our project, about which I will be making an announcement in the coming days. Essentially, we will be working to get Ukrainian refugees a legal status in Europe and provide housing assistance. Most of the refugees are women with children, who have money for 1-2 weeks, and whose husbands have signed up for civil defense departments.”

Questioned as to how his business, which was in large part built on serving the Russian market, will pivot now that he is turning away his hitherto biggest customer group, Lyetayev says he has already been setting things in motion to cater to other demographics.

“Before the war, we concluded negotiations with Nestor Alfred, former head of the Saint Lucia CIU, to join our team to strengthen our Caribbean presence and help in our expansion to English-speaking regions. We have a team of 10 people in Lisbon, and we also have an office in the US, so the clients will not be affected.”

Going forward, he says, the firm will work exclusively with clients who explicitly condemn Russia’s war in Ukraine, “regardless of whether these clients are from Kazakhstan, the USA, or South Africa,” and will use part of its client fees to support Ukrainian refugees.

Questioned as to the fairness of his firm’s, and that of multiple RCBI-programs, enacting blanket suspensions on services for Russians qua Russians, Lyetayev conceded it may not be a nuanced approach but the only practical one.

“Of course, we can’t say all Russians are the same. But, for a CBI country, for example, it’s impossible to distinguish between the good and the bad, so the only choice they have is to close the door to all of them. Maybe there could be an “iron curtain” with exceptions? Unfortunately, many Russian businessmen support Putin.”

More on how the war in Ukraine is impacting the investment migration market: