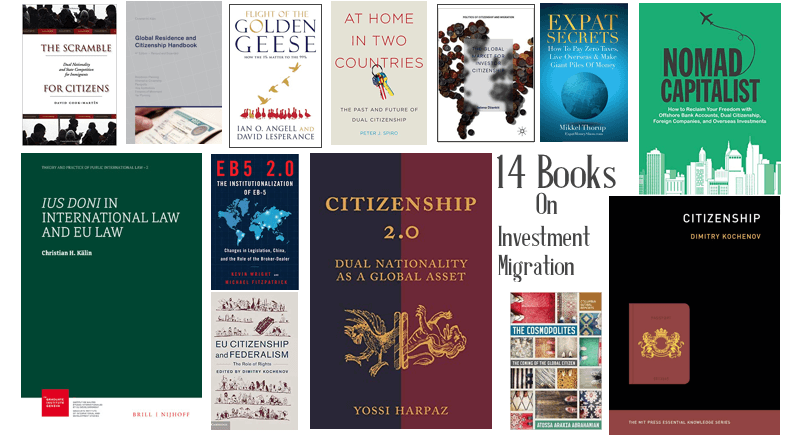 For convenience, we’ve segregated the list into academic and non-academic works. If you know of a book that should be on this list but isn’t, please email the editor on cn@imidaily.com

See the reading list below, or visit its dedicated page: Books on Investment Migration. Henceforth, you’ll find it under “Tools” in the top menu.

“Kochenov’s definitive collection examines the under-utilised potential of EU citizenship, proposing and defending its position as a systemic element of EU law endowed with foundational importance. Leading experts in EU constitutional law scrutinise the internal dynamics in the triad of EU citizenship, citizenship rights and the resulting vertical delimitation of powers in Europe, analysing the far-reaching constitutional implications.”

“Citizenship 2.0 focuses on an important yet overlooked dimension of globalization: the steady rise in the legitimacy and prevalence of dual citizenship. Demand for dual citizenship is particularly high in Latin America and Eastern Europe, where more than three million people have obtained a second citizenship from EU countries or the United States.”

At Home in Two Countries: The Past and Future of Dual Citizenship
NYU Press
Peter J. Spiro

“At Home in Two Countries charts the history of dual citizenship from strong disfavor to general acceptance. The status has touched many; there are few Americans who do not have someone in their past or present who has held the status, if only unknowingly. The history reflects on the course of the state as an institution at the level of the individual. The state was once a jealous institution, justifiably demanding an exclusive relationship with its members.”

“Today there are cosmopolites of all stripes, rich or poor, intentional or unwitting, from 1-percenters who own five passports thanks to tax-havens to the Bidoon, the stateless people of countries like the United Arab Emirates. Journalist Atossa Abrahamian, herself a cosmopolite, travels around the globe to meet the people who have come to embody an increasingly fluid, borderless world.”

“Geography is no longer a limitation for those willing to follow Andrew Henderson’s ‘Five Magic Words’ and “Go where you’re treated best.” As the world’s most sought-after expert on offshore tax planning, second passports, and global citizenship – cited by the BBC, Bloomberg, Elite Daily and more – Andrew has condensed his last ten years of investigative world travel into an unprecedented book to help entrepreneurs and investors keep more of their own money, live where they want, become citizens of the world, and improve their lives and the planet.”

“It is commonly assumed that there is an enduring link between individuals and their countries of citizenship. Plural citizenship is therefore viewed with skepticism, if not outright suspicion. But the effects of widespread global migration belie common assumptions, and the connection between individuals and the countries in which they live cannot always be so easily mapped.”

“This book presents a systematic study of the history, theory and policy of investor citizenship and residence programmes. It explores how states develop new rules of joining their community in response to globalisation and highlights the tension between citizenship policies aimed at migrant integration and those, such as the sale of passports, which create ‘long-distance citizens’.”

“This book is the quintessential guide for global citizens and their advisers, such as law firms, tax consultants, private banks and family offices. At the same time the handbook is also invaluable for business owners, entrepreneurs and investors who are interested in expanding their horizons.”

The Flight of the Golden Geese: How the 1% Matter to the 99%
Bullhorn Press
Ian O. Angell and David Lesperance

“Flight of the Golden Geese highlights the growing importance of passport portfolio management as a form of wealth protection. There is no denying the facts: The ultra wealthy are packing up their seven-figure tax burdens and fleeing their home countries in droves for Ireland, Singapore, and other tax havens-and why shouldn’t they? For years governments have relied too heavily on a small percentage of citizens to shoulder the lion’s share of their greedy habit, but now these high net-worth individuals, the Golden Geese as they have come to be known, are taking matters into their own hands. “

“In this #1 Best Selling Book Mikkel Thorup draws on his 20+ years of overseas experience to bring you an easy to understand guide for living overseas, saving money on taxes, obtaining a second passport and travelling the world as an Expat.
The book covers topics like offshore incorporation, eliminating your tax bill, private banking, international gold & silver vaults, residency in a tax-free country, obtaining a second passport, global asset protection, and owning foreign real estate.”

“Whether you are a foreign investor seeking a United States green card or a domestic developer sourcing capital for your latest project, the United States EB-5 visa program offers unique opportunity. In an industry known to be difficult to understand, The EB-5 Handbook breaks down the EB-5 program into its simple basics— investment, economic growth, and green cards. In The EB-5 Handbook, investors and developers alike will learn the essentials of the program, the benefits it can offer, and how to get started on their EB-5 journey with sections uniquely tailored to each party.”

EB5 2.0 | The Institutionalization of EB5: Changes in Legislation, China, and the Role of the Broker-Dealer
Lioncrest Publishing
Kevin Wright and Michael Fitzpatrick

“Since 1990, the Immigration Investor Visa Program (EB-5) has enabled American real estate developers raising capital for projects from foreign investors seeking to relocate to the United States. In recent years, however, lack of clear regulations, failure to extend legislation, and shortage of visas has made the landscape difficult, especially for Chinese investors, sending the EB-5 industry globally to alternative markets. Fortunately, there is an essential, up-to-date handbook to guide stakeholders through the changes in the EB-5 process.”