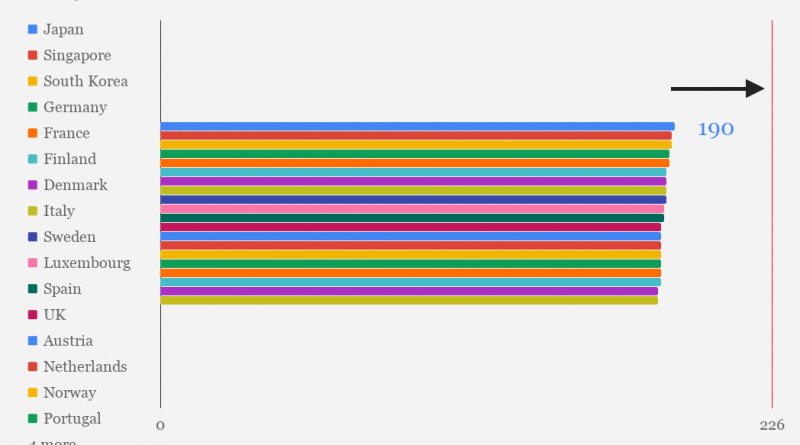 With visa-free access to 85% of the world, the Japanese passport is now the world’s most powerful. Could we soon see a time where some passports reach 100%?

The Japanese can visit no less than 191 out of 226 countries and territories, according to the Henley & Partners Passport Index, making their passport the world’s most mobile. Second and third on the same ranking, respectively, are the Singaporeans and South Koreans, together forming a historic all-Asian podium.

Recent developments in global travel-freedom – across the board – are nothing short of remarkable; the Index offers figures dating back to 2006 showing that, fewer than 14 years ago, even the very best passports could only offer 130 visa-free destinations, a number that wouldn’t even get you into the top 70 today.

Is it so inconceivable to imagine that a handful of wealthy, peaceful countries will soon have visa-free access to all 226 countries and territories?

Japan has added 62 destinations to its roster since 2006. That’s about five a year. It only has 36 countries to go, the preponderance of which are in Africa.

In terms of visa-waiver agreements, there was a great deal of low-hanging fruit available in the last decade, and as countries inch closer to 100%, they will no doubt find an increasing challenge in making marginal gains in mobility. There will be outlier holdouts that steadfastly resist bilateral travel freedom; North Korea, Cuba, and Saudi Arabia spring to mind. We may well see decades where the top 30-40 countries enjoy access to all but a handful of hermit kingdoms, always approaching zero but never quite reaching it, like an asymptote.

But if global mobility improvement continues apace, we’ll see a passport with worldwide visa-free travel in less than a decade.