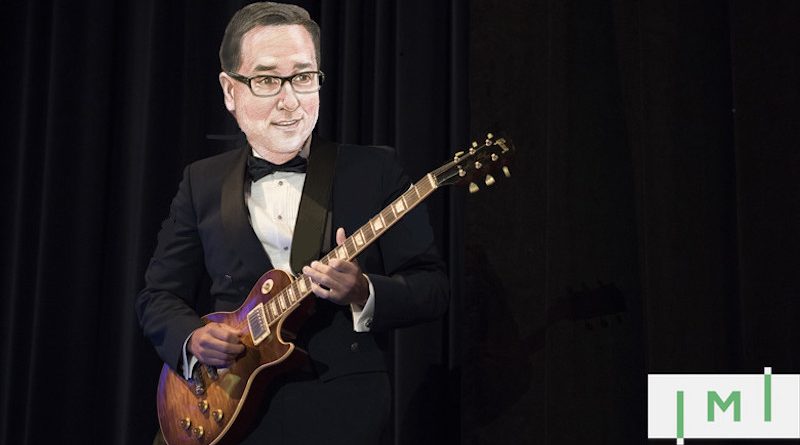 Ten On The Weekend is a new, weekly feature on IMI. The concept of TOTW is simple: Each weekend, we ask the same ten questions to a different industry figure, letting readers get to know the interviewee on a more personal and informal level than they might in an ordinary business setting.

How do you spend your weekends?
If I’m not away on business travels somewhere in the world, then my wife and I try to catch-up with friends over drinks/dinner on Friday or Saturday nights. I am a glutton for punishment most Saturday mornings because my wife and I typically play a couple of hours of tennis and she always beats me. On Sundays, there is the obligatory 4-8 hours office-related work, just to keep up from a prior busy week, but I also try to offset that with an hour or two on my left-handed guitars, which helps me release a bit of steam and get my creative juices flowing.

What are your top three business goals this year?
We closed off 2019 in high form, with a 38% increase in sales over the previous year, so one of our goals in 2020 is to repeat that success by hiring more business development managers and entering new markets, which happens to be our second goal.

We will continue our expansion into new markets, most notably in South East Asia and Africa. Our third goal is to enter into a strategic partnership with a large, international and institutional player that offers complementary services to Latitude. This may take the form of commercial collaboration, a joint venture or possibly an outright acquisition. We are having interesting discussions in this regard and hope to have this goal materialize sometime in 2020.

What’s your biggest business concern right now?
My biggest concern is the constant ‘tightening of the noose’ around our industry’s neck. Over the last five years, we’ve seen rising attacks from the media and I think it’s starting to take a toll commercially on some key players.

Frankly, our industry deserves some of the bad press it receives if you consider stories like those of careless and greedy politicians selling diplomatic passports in the Caribbean, or obvious gaps in due diligence procedures under some programs, or damming undercover mystery-shop videos exposing industry peers, to allegations of electoral tampering in the Caribbean and possibly elsewhere. It never seems to end and, frankly, it’s tainting the very honest and meritorious work that most of us are conducting day-in and day-out, trying to empower worthy clients and their families with the services we provide.

Which book is on your night-stand right now?
At the moment, two wonderful but diametrically opposed books:

The first one provides an engaging account of the great thinkers in Western philosophy and their most compelling ideas about the world and life in general. The second one is simply to remind me of the triviality of everyday life – Good grief, Charlie Brown!

How and when did you first get into the investment migration industry?
My first day in the industry was September 12th, 1994. I was hired in Montreal as the Manager of National Bank of Canada’s Immigrant Investor Program. I had applied for the job right after graduating from my Masters in Economics. As many of your readers already know, the province of Quebec is the bedrock of the residence by investment industry.

What a great learning experience it was! I held that role for two years before landing my dream job at HSBC in Vancouver, doing the same work but for a much larger, international group. I held that role for 15 years, during the heyday of the Canadian Immigrant Investor Programme (IIP). The experience was nothing short of awesome. From there, I left Vancouver to relocate to Jersey and head Henley & Partners, which expanded my experience into the citizenship by investment world. In 2017, I decided to go on my own and launched Latitude, which has been a tremendously rewarding experience.

What was your proudest moment as a service provider?
Well, after more than 25 years in the business, I am lucky to say there have been many but, if I had to choose only one, it was being part of the negotiations which ultimately led to the launch of the Federal (Canada) IIP between 1999 and 2001 which, within three years of its launch, became the biggest residence by investment program in the world. With the Federal government, I was a lead contributor to its creation and my team and I at HSBC managed to capture over 40% market share in the years 2001-2008. We travelled the world and brought over 4,000 investors and their families to Canada. Those were the days…

If you could go 10 years back in time, what business decision would you change?
Patience in life is generally a good thing but, in business, it’s often a luxury one cannot afford. Hindsight is always 20-20 but there were maybe two or three times in the last ten years that I wish I reacted a bit quicker or made a decision a little sooner. Luck was still on my side in the end, but I would have seen a better result had I reacted quicker. The lesson here is to trust your gut instincts and, once you make a decision, follow through with it and don’t faff around.

What investment migration industry personality do you most admire?
I have much respect for many of my industry colleagues, some of whom are pioneers of the business but, upon serious reflection, I have to raise my hat to those government officials in the early days who took a risk in creating a government policy that wound up creating the industry we know today.

Only a few of your readers will know the names Louise Robic and Gérald Godin, who are effectively the creators of the Québec Immigrant Investor Programme. The idea was developed by Minister Gérald Godin when he was Minister of Immigration in the early 1980s and was eventually brought to fruition by his successor, Minister Louis Robic in 1986.

The Godin-Robic formula was unique because it had the Québec Department of Immigration operating in an extremely effective partnership with private financial institutions, which included groups like Desjardins, National Bank of Canada, Scotia Bank, etc., who were tasked to source the investor and assist the government in allocating their capital to small and medium size enterprises in the province of Québec.

If you ever wondered why there are so many (French) Canadian ex-bankers in our industry, it’s because of this construct adopted by the Government of Québec in the mid-80s. Such a partnership only existed in Québec.

In the CBI world, we would have to acknowledge Denzil Douglas of St Kitts, again for taking the risk of implementing a new policy which, at the time, no other nation had implemented. Those politicians are the true creators of our industry and we should all raise our hats in their honor.

If all goes according to plan, what will you be doing five years from now?
Well, assuming my and my board’s world domination plans come to fruition, we hope to be part of the largest and most successful visa, residency and citizenship firm in the world.

See also: Ten On The Weekend #1 – Nuri Katz: “I Live My Life in a Constant State of Jet Lag”