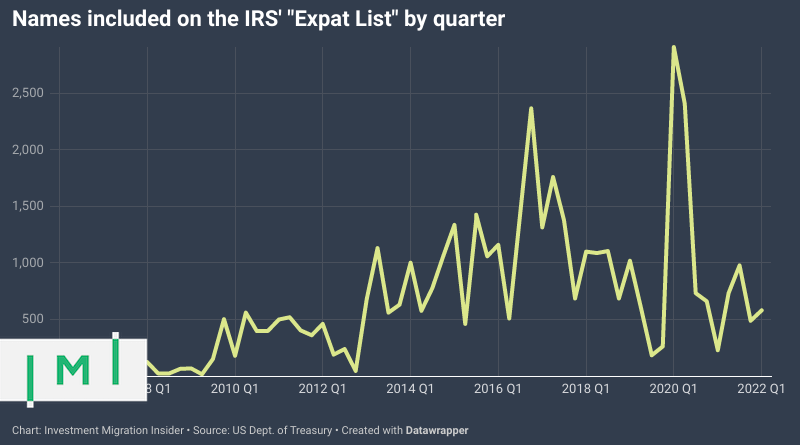 In its Quarterly Publication of Individuals Who Have Chosen to Expatriate for Q1 2022, the US Internal Revenue Service (IRS) this week listed the names of 580 so-called “covered expatriates”, American citizens (and some long-term residents) whose net worth exceeds US$2m or whose average annual tax bill over the last five years has exceeded US$178,000) who have successfully expatriated, typically by renouncing their US citizenships.

Extrapolated annually, the 580 figure is 4% lower than the corresponding annual expatriation figure for last year and a full 65% below the 2020 figure.

In the early days of the pandemic, one man predicted precisely this drop-off in renunciations, as well as its timing.

In what turned out to be a seminal article (Record Numbers of Americans Renouncing Citizenships Has Nothing to Do With The Pandemic), David Lesperance pointed out that the high number of published expatriations at the time was unrelated to the contemporaneous COVID-19 crisis because of the 12-18 month lag between actual expatriations and the IRS' reporting of the same.

The time lag between expatriation and expatriation reporting, combined with the observation that, ostensibly due to contagion concerns, most US consulates closed during 2020 and 2021 (many of which have yet to reopen halfway into 2022), led Lesperance to prognosticate that we would see a sharp drop-off in the number of names on the Expat List starting in the second half of 2021.

"Not only was the increase in the number of renunciations taking place not a result of the US government’s reactions to Covid-19," wrote Lesperane in August 2020, "but I will go out on a not very thin limb and predict that, in about 12 to 18 months [4 to 6 quarters later], there will be a massive drop-off of in the number of names on The List."

Speaking to IMI today, Lesperance indicates the numbers will remain depressed for several quarters yet because, in his rough estimate, about 75% of consulates are still not accepting appointments for renunciation.

Lesperance has previously argued that the State Department is artificially suppressing the supply of renunciation appointments on purpose and that the pandemic has merely provided a pretext for stalling. He has also pointed out that this refusal to grant appointments on the part of many US consulates precedes COVID by several years.

In August last year, Lesperance estimated the backlog of people waiting for renunciation appointments had reached 20,-30,000. And that's only counting the Covered Expatriates; not the tens of thousands of Americans who aren't multimillionaires but who, nonetheless, wish to expatriate. Lesperance thinks the backlog now exceeds 30,000 and that it's still growing rapidly.

"Much of the rhetoric that surrounded the 2020 mid-term elections [Elizabeth Warren's wealth tax proposals and Biden's proposed tax on unrealized capital gains] drove a sharp rise in expatriation interest. Filings from this period will have piled up in the last year and half as consulates remained closed."

To ameliorate the situation for his own clients who wish to renounce, Lesperance says he's taken to petitioning for writs of mandamus (a court ordering a government office to fulfill its duty) that would force the US diplomatic missions to grant renunciation appointments, based on the argument that "a right delayed is a right denied" and that, since US citizens have a right to renounce citizenship, the State Department is not fulfilling its duties.