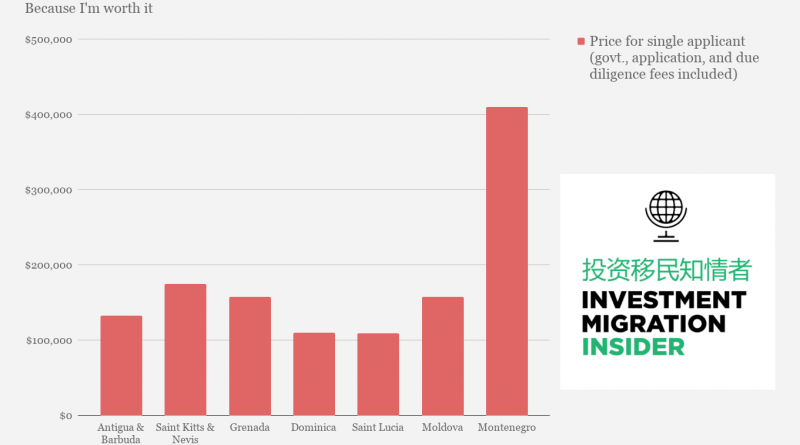 Montenegro and Moldova will both launch citizenship by investment programs (CIPs) by October. Neither are EU-members, both have visa-free access to Schengen, but Montenegro has priced itself far above Moldova. Why?

What does Montenegro have that Moldova doesn’t, to warrant a price tag three times higher?

While both countries are signatories to the coveted visa-waiver agreement with the Schengen area – a sine qua non for a competitive CIP – Montenegro does have a slight edge over Moldova. We’ve compared the two passports on the visa-free dimension below.

Montenegro has a few heavy-weight destinations on its visa-free roster that Moldova doesn’t, but hardly enough to warrant nearly three times the price. Furthermore, most of the choice destinations Montenegrins have that Moldovans don’t are also available on Caribbean passports, which are much cheaper than the Montenegrin.

Nothing compares to EU

Some applicants may be willing to pay a premium for the relative likelihood of a country becoming an EU-member, even if not guaranteed. In this respect, Montenegro is certainly closer than Moldova.

Montenegro officially applied to become a member of the EU in 2008 and formal negotiations opened in June 2012. The EU has outlined 33 “chapters” for Montenegro to address. Of the 33, 31 have been opened. Of the 31 that have been opened, three have been closed. As an official “candidate country”, Montenegro enjoys “widespread support” among EU member officials.

In February this year, the European Commission stated that Montenegro “could” become an EU member in 2025, but that they would first need to reach several critical (and challenging) milestones:

“In order to meet the well-established membership criteria and in their own interest, the Western Balkans need to implement comprehensive reforms in crucial areas. The rule of law, fundamental rights and governance must be strengthened significantly. Judicial reforms, the fight against corruption and organized crime, and public administration reform need to deliver real results and the functioning of institutions needs to be seriously enhanced,” said the European Commission.

Montenegrins are overwhelmingly pro-EU, with some 72% of the population favoring accession.

The conclusion to be drawn is that while Montenegrin accession to the EU is not only on the table but, indeed, likely, it is at least seven years away. Realistically, it’ll probably take at least a decade.

For now, Moldova isn’t even on the table, as far as EU-accession is concerned. The country has not met the criteria necessary to submit an application for membership and, even if it did, it is by no means to be taken for granted that it would, as recent polls show less than half the population favor membership.

Beyond popular disinterest, several significant obstacles remain in the way of Moldovan EU-membership, not least of which is its internal conflict with breakaway region Transnistria, and disputes with the autonomous Gagauzia region, where virtually all residents oppose EU-accession.

While accession to the EU by Moldova as a country is all but inconceivable, a sliver of hope remains for the minority of Moldovans wishing to join Europe; Since the late eighties, a movement to unify Moldova with its neighbor Romania (already a full EU-member) has been developing. To make a long story of changing borders, allegiances, forms of government, and patterns of settlement short; large swaths of what is today referred to as Moldova used to be part of Romania, which is why residents of the two countries speak the same language.

While a non-negligible proportion of Moldovans would support (re-)unification with Romania in a referendum, such a vote is unlikely to take place and, even if it did, would likely not result in a yes-decision.

While Montenegro sports a resplendent coastline set amid verdant peaks that slope dramatically into an azure-colored Adriatic, Moldova is a landlocked nation that captivates visitors with an eclectic mix of orthodox churches, limestone wine cellars and the grey housing blocks vestigial to so many post-Soviet territories.

Adjusted for purchasing power, Montenegro is a middle-income country with a GDP per head similar to that of Barbados (US$ 18,000 and change), while that of Moldova (US$ 5,700) would make it the 18th richest country…in Africa.

Whereas Moldova’s territorial disputes are ongoing, those of Montenegro are settled.

No CIP is an island

Montenegro compares favorably to Moldova in terms of visa-free access, likelihood of EU-accession, standard of living, and aesthetic appeal, and it’s not unreasonable for the government in Podgorica to demand a higher price than their peers in Chisinau.

But Montenegro isn’t just competing with Moldova; its position in the market is more appropriately benchmarked against the Caribbean CIP-countries, which offer essentially the same level of mobility but – crucially – at a much lower rate. And they’ve got similar levels of GDP, and plenty of picturesque coastline too.

The only factors – that I can think of – left to explain Montenegro’s 3x markup over its competitors, then, is its possible (but far from guaranteed) future as an EU member state.

But if I want EU citizenship, I’m better off investing EUR 250-500,000 in a Golden Visa in Portugal and spending a few weeks there over the next five years; In the end, I’ll get an EU passport and, in the meantime, I’ll have visa-free travel to Schengen anyway.

I’d tell the people who came up with Montenegro’s price the same that I would tell the masterminds who decided Turkey’s passport was worth a million dollars: Who do you think you are? What makes your citizenship so special you think it’s worth three times more than one that offers almost exactly the same benefits?

Your passport may be imbued with all manner of lofty ideals and national-romantic sentiment, but you’re still participating in a market; a market that doesn’t care about your particular brand of uniqueness but about what you can offer in terms of mobility and settlement rights; a market that has already arrived at a prevailing rate for passports just like yours.

This means you can’t price your citizenship without regard for what other countries are offering as if your country were somehow sacred, exceptional, and above comparison on something as mundane as market price. The theoretical, distant possibility of EU membership could justify – maybe – a 50% premium. But 300%? Get out of here!

Am I missing something? Let me know in the LinkedIn/Facebook comments.