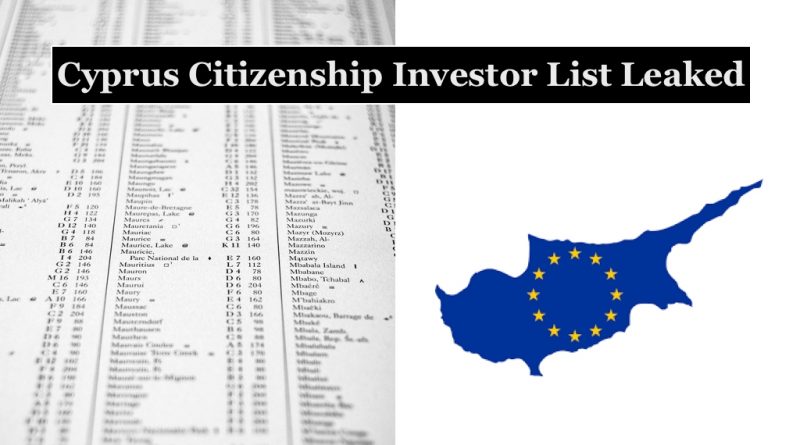 In two related articles appearing last night in The Guardian, Cyprus’ Citizenship by Investment Programme comes under scrutiny, following what the newspaper describes as a leak. A bevy of Russian and Ukrainian billionaires are mentioned by name, and the reporters draw into question the integrity of the CIP.

You may view the original articles here and here.

The Guardian, in this instance, takes a page from the playbook of CBS’ 60 Minutes by deliberately conflating separate issues so as to make the CIP industry appear shady, wilfully misdirecting readers. What they should have done, instead, was to follow the shining example of the BBC, which reported even-handedly on Malta.

For example, the article mentions Rami Makhlouf, a relative of Syria’s President Assad, naturalized as a Cypriot in 2010, who was sanctioned by the US and EU for corruption allegations. Cyprus has since revoked his citizenship. In other words, not only did the man in question become a Cypriot years before the launch of the Citizenship by Investment Programme; the Cypriot government has even taken corrective measures in the aftermath.

Why then lump Makhlouf in with the legitimate CIP, in which a man like him would never get past even the preliminary stages of due diligence?

a) Obtained citizenship through the Cyprus CIP

b) Should not qualify for the Cyprus CIP because they are Politically Exposed Persons (PEPs) or criminals.

For reference, the formal Cyprus Citizenship by Investment Programme opened in 2013. Prior to this, citizenships were granted to investors on a discretionary basis.

Rami Makhlouf: The abovementioned Makhlouf does appear to be an unsavory character, but obtained citizenship before 2013 (later revoked).

Dmitry Rybolovlev: Obtained citizenship before 2013. In any case, he is not a PEP, nor does he stand accused of corruption. His only “crime”, in the eyes of the left-leaning crusaders of the Guardian, is that he is a billionaire art collector crisscrossing the globe in a private jet and once bought a property from Donald Trump. Send him to The Hague!

Alexander Ponomarenko: Did obtain citizenship through the CIP, but isn’t a PEP nor accused of crimes.

Gennady Bogolyubov and Igor Kolomoisky: The Ukrainian government nationalized their bank last year, saying they had been “illicitly extracting US$ 4.2 billion”, an accusation both individuals are contesting in a civil suit against the Ukrainian government. In any case, they obtained citizenship in Cyprus before 2013.

Leonid Lebedev: A former member of parliament in Russia, and therefore definitely a PEP. The article, however, does not specify when he obtained citizenship, which leads me to presume it was before 2013.

Nikita Mishin: Did acquire citizenship through the CIP, but is not a PEP nor accused of crimes.

Konstantin Stetsenko: A Ukrainian who is Managing Partner in a company hired to advise on the sale of the Ukrainian president’s private confectionery business, a sale which, incidentally, has yet to take place. Stetsenko did obtain citizenship through the program but is not a PEP.

Konstantin Grigorishin: No formal charges have been brought against Mr. Grigorishin, nor is he a PEP. According to The Guardian, he received his citizenship in Cyprus in 2010.

Teddy Sagi: A tech-startup billionaire who isn’t a PEP. He also received his Cypriot citizenship before 2013.

That’s the extent of it. The Guardian, then, does not manage to identify even a single case of a citizenship inappropriately granted under Cyprus’ Citizenship by Investment Programme, yet are grasping at straws to find a way to put citizenship by investment in a bad light.

It could be that the list seen by The Guardian does, in fact, contain the names of individuals who obtained citizenships through the CIP when they should not have, either because they are PEPs or criminals. But if it doesn’t, why write an article insinuating foul play on the part of the Cyprus CIP, making it appear as if they’re engaged in the wholesale peddling of passports to supervillains, and tarnishing the name of a perfectly legitimate industry?

Ana Gomes, a Portuguese MEP, tells the Guardian she believes golden visa schemes are “absolutely immoral and perverse” (she must not have read 6 Moronic Objections to Investment Migration) and added that she had attempted several times to obtain a list of immigrant investors in Portugal without success.

“Why the secrecy? The secrecy makes it very, very suspicious,” said Gomes.

The reason Miss Gomes has been unsuccessful in obtaining a list of names is that sanctimonious and politically ambitious people like herself are liable to leak such private information to the press.

Grenada’s government recently announced they would provide a list of CIP citizens to parliament, which means at least 15 MPs and 13 Senators, anyone of whom could easily divulge that information to a third party, should they see a potential for political gain. This Cyprus leak will give the Grenadian government pause.

Look closely at the bottom of the first article, and you’ll find the following statement:

“This article was developed with the support of the Journalism Fund.”

What is the Journalism Fund, you ask? It may interest you to know that one of its main sponsors is The Open Society Foundation, the George Soros controlled international grant-making institute, that last year spent at least US$33 million to fund groups like Antifa and Black Lives Matter and a slew of riots around the world.

Whether you sympathize with Soros’ interventionism or not, his flagship foundation is unquestionably in the business of swaying public opinion and influencing the news cycle. I’ll leave it to the audience to draw their own conclusions as to why they may wish to influence public perception of citizenship by investment.