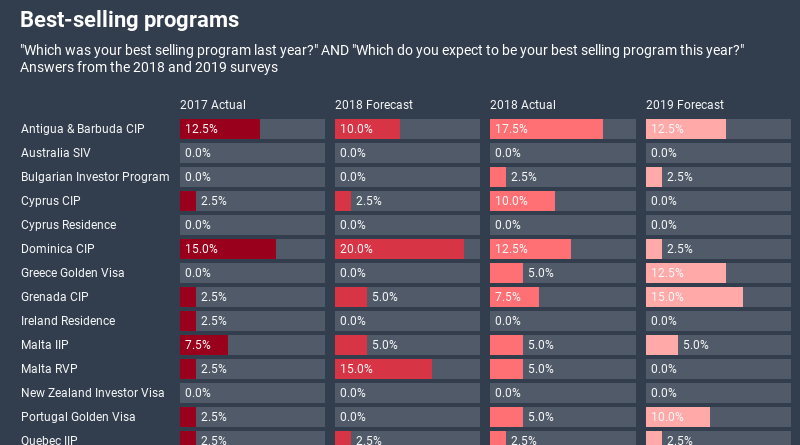 The results from IMI’s 2019 Investment Migration Executive Survey are in. Over the coming weeks, we’ll be releasing the data in sections.

Who’s included in the survey, who isn’t, and why
Survey respondents consist of the top executives of 40 international investment migration advisories with a global presence and clientele. The questions are designed to gauge market trends, program performance, and future expectations.

Not included in the survey report are local lawyers or developers who focus on a single program, nor single-market agencies (such as those in China) due to the homogeneity of their client base and lack of international presence. We also survey such firms, but these results are reported separately so as not to skew the data of the Investment Migration Executive Survey, which focuses on international RCBI-specialist advisories.

Excluding single-program focused firms allows for an apples-to-apples comparison of trends. The results from the survey should not be interpreted as indicative of the absolute size and popularity of RCBI-programs. To wit: The US EB-5 program was, by far, the world’s largest program in 2018 measured in FDI but, because the vast majority of EB-5 investment is conducted via firms that focus exclusively on North American programs – and because single-focus firms are excluded from the survey – the true size of the program is not reflected in the survey results.

What the survey does measure accurately are the market tendencies among firms that assist with applications to the whole gamut of programs – European/North American/Southeast Asian residence programs, Caribbean/European/Pacific citizenship programs.

While we will not be publishing their names, the list of firms participating in the survey includes all the largest and best-known industry incumbents. While the sample size is small, the size of participating firms and their internationally diversified program portfolios nonetheless make it a representative selection.

Keep in mind, however, that some firms in the survey are much larger than others; as such, the trends observed among larger firms will weigh more heavily than those observed among smaller ones, which means the survey cannot accurately describe the program popularity in absolute terms. For example, there are cases in which more than 30% of a program’s applicants have their source in a single, large company; this means that while that particular program may score very high in terms of the absolute number of applicants, relatively fewer firms will list it as their best-selling program.

The survey is conducted on a continual basis throughout the year. If you’d like your firm to be considered for inclusion in next year’s survey, please email the editor on cn@imidaily.com.

See also: Preliminary Data Points to Record Year for Residence by Investment in Europe in 2019

The 2019 Survey marks the second year in which investment migration firms were asked which was their best-selling program over the last year and which they predict will be the best-seller in the current year. This allows, for the first time, for year-on-year comparisons and the juxtaposition of predictions and reality.

In the 2018 Survey, 15% said the Dominica CIP was their best-selling program during the preceding year and one-fifth predicted the same program would come out on top in 2018. When asked about actual 2018 performance in this year’s Survey, however, only 12.5% indicated the Dominica CIP had been their most sold program.

Instead, Antigua & Barbuda, which 10% of senior executives in 2018 tipped as the 2019 winner, finished first when actual results had been recorded; 17.5% said it was their most-sold program in 2018.

Questioned as to which program they expected to be the best-seller this year, a plurality of firms (15%) pointed to the Grenada CIP, three times as many as predicted the same last year.

Some programs exhibited significant differences between firms’ forecasts and recorded reality; While 15% of respondents predicted the Malta RVP would be their most sold program in 2018, only 5% indicated this had, in the final tally, been the case.

Among programs that exceeded expectations, the CIPs of Cyprus and Antigua & Barbuda stood out, outperforming predictions by 7.5 percentage points each.

Benchmarking each program’s performance relative to itself in the past, the Survey also considered the growth or decline in clients’ propensity to pick a given CIP or RIP in 2019 compared to 2018.

18% of respondents indicated the Antigua & Barbuda CIP had seen the greatest relative rise in popularity among investors, closely followed by the Grenada CIP and the golden visa programs of Greece and Portugal.

Ireland’s IIP, however, was conspicuous by its falling graces; 13% of respondents indicated the program had seen the greatest relative decline in popularity among clients.

If you like statistical comparisons like these, you’ll love our Data Center, as well as the Intel & Data category.