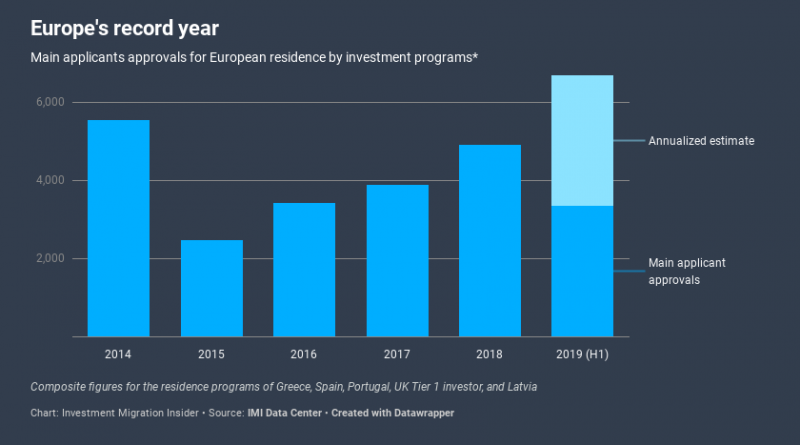 As the contours of 2019’s full-year figures begin to take shape, the empirical data increasingly indicate Europe’s residence by investment market will have its best year yet.

Half-year approval numbers are now publicly available for five out of Europe’s seven major residence by investment programs (RIPs or “golden visas”); those of Spain, Greece, the UK, Portugal, and Latvia. The data remain in private hands for Malta’s RVP and Ireland’s IIP, but when the annals of the investment migration year of 2019 are written, those two RIPs are unlikely to account for more than 15% of the total. Extrapolating with the numbers on hand, therefore, renders estimates that statistically deviate only slightly from reality.

Year-on-year improvement across the board, almost.

With the exception of Portugal’s Golden Visa, all Europe’s major RIPs are on track to deliver tremendous volume increases on the preceding year. At the half-year mark, Latvia’s numbers had reached 73% of the full-year 2018 figures; Spain’s and Greece’s, 71%; and the UK’s 68%. Only Portugal’s H1 figures hinted at an annual contraction in approvals, and that only by a slight margin, a trend they may yet mitigate in the second half.

Two programs – those of Spain and Greece – are set to see all-time highs in 2019. The UK and Latvia will record their best performance since their bumper 2014, in which the UK saw a surge of applications in anticipation of its price doubling while Latvia was enjoying its last days of EU golden visa first-mover advantage (the Mediterranean programs did not open in earnest until 2014/15, essentially giving Latvia a monopoly on six-figure residence by investment in the EU between 2010 and 2014).

Annualizing the first-half figures, Latvia, Spain, Greece, and the UK are on track to improve their year-on-year performance by 46%, 42%, 42%, and 36%, respectively, while Portugal would see a 12% reduction in approvals.

Considering the half-year numbers of the five programs in combination, EU golden visas are set to see a 36% increase in approvals compared to 2018, and the highest number of approvals on record by a margin of 21%.

In terms of total revenue, records are even more pronounced. Europe will raise a bare minimum of EUR 5.05 billion, an estimate arrived at through multiplying the number of main applicants with the minimum required investment amounts in each country. That figure is 43% higher than for 2018, which was itself a record year.

See more detailed statistics, articles, and official links for each program by visiting the program pages of Portugal, the UK, Greece, Spain, and Latvia. To see which companies can assist with applications to those programs, visit the Residence & Citizenship by Investment Company Directory.