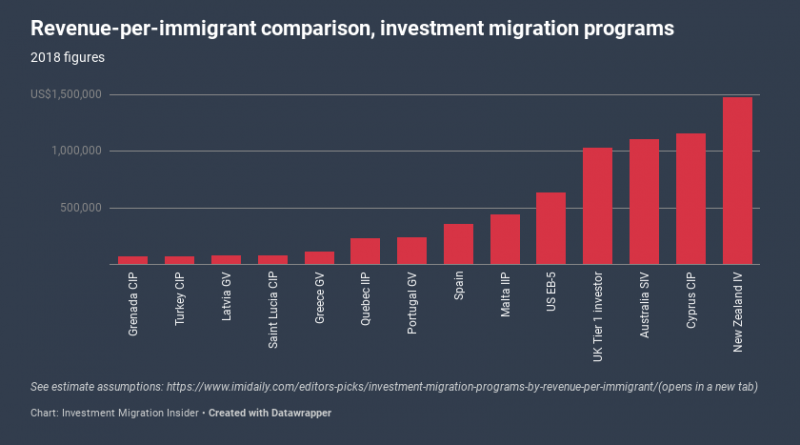 How much revenue do the world’s residence and citizenship by investment programs bring in per immigrant, i.e., when counting the total number of passports or visas issued, including those for family members?

Calculating a program’s per-application revenue isn’t that complicated; either the programs themselves report the overall income, or a reasonable (conservative) estimate may be arrived at by multiplying the number of main applicants with the minimum investment amount.

But programs vary widely in terms of the number of dependents included in the average application; programs with a high degree of Sunni-Muslim applicants, for example, have much greater average family sizes than those whose investors are predominantly Chinese or Russian.

How do the programs stack up in terms of per-person revenue? That is to say, who gets more “bang for their immigrant-buck”? We’ve considered only the year 2018 (the last full year for which we have the most complete data set) and looked at the number of investments made, the number of visas or passports issued, and the total revenue for each program to arrive at a per-immigrant revenue number.

By revenue, we mean investments, government fees, and donations. We’ve also normalized all amounts to appear in their US$ equivalents.

As with any attempt to calculate revenues for residence and citizenship programs, completely accurate figures are elusive and we have had to make certain assumptions. You may judge for yourself whether you think our assumptions reasonable and, if you don’t think they are, take our analysis with a pinch of salt.

For the programs that report revenue, we have used official figures. This is the case for

For countries that don’t, we have calculated revenue by multiplying the number of main applicants by the minimum investment or (in the case of Spain) by officially reported investment averages.

Because we have presumed each applicant invests only the minimum under the following programs, their estimates should be considered ultra-conservative:

Programs excluded from the analysis for lack of reliable data:

Programs excluded due to non-existent or unquantifiable investment minimums:

Enormous disparities between programs are readily apparent; New Zealand’s Investor Visa program tops the list, raising close to US$1.5 million per immigrant. That’s almost 25 times more than the last program on the list – the Grenada CIP, for which we have very accurate figures thanks to their top-notch reporting standards – which saw capital inflows of only US$63,455 per immigrant.

Viewed from a different angle:

If you like statistical comparisons on investment migration programs, you’ll find a lot more of that in the IMI Data Center.