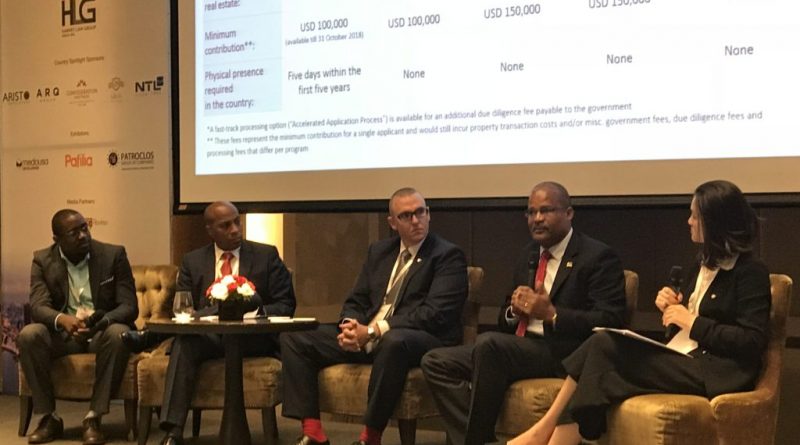 The figure is likely the highest reported by any such program worldwide in several years and represents a volume not officially heard of in the Caribbean since 2015, when Saint Kitts & Nevis posted application numbers of 2,296 which, incidentally, is the last year for which we have been able to obtain figures for the Kittitian program; Its current CIU-head considers such information competitively sensitive and to be shared only with governments and parliamentarians, not necessarily with his competitors.

The vast majority of Dominica’s CIP-participants choose the contribution option, which starts at US$100,000 for a single applicant. Questioned as to the country of origin of most of his applicants, Nanthan told Investment Migration Insider that, while he did not have exact figures, the great preponderance of applicants were from the Middle East and China.

Speaking to Investment Migration Insider on the sidelines of the conference today, several CIU-officials from other Caribbean countries acknowledged that the number reported was remarkably high.

“I would love to know what Dominica is doing! With those numbers being rolled out today, I’m impressed. I would love to hear their secret so that some of us in the other programs can emulate them,” said Lucius Lake, Director of the CIP-board of Saint Lucia.

Asked what he thought it would take for his own program to reach similar application volumes, Lake indicated he would have to have a chat with Nanthan in private to get some pointers.

“2,000 applications in a fiscal year? Wow! That speaks volumes about what they’re doing and what we’re not doing,” continued the director, whose own program recently reported that 259 individuals had been granted citizenship in 2017.

While Saint Kitts and Nevis’ application number remains a trade secret, according to official figures from Grenada and Antigua & Barbuda, those programs received 302 and 330 applications, respectively, in the year leading up to June 2017.

Read also: Grenada CIP Revenue Double in 2017 to $130M According to CIU-Boss and Chinese Account for Half of Antigua CIP Applicants – Program Interest up 27% on Year