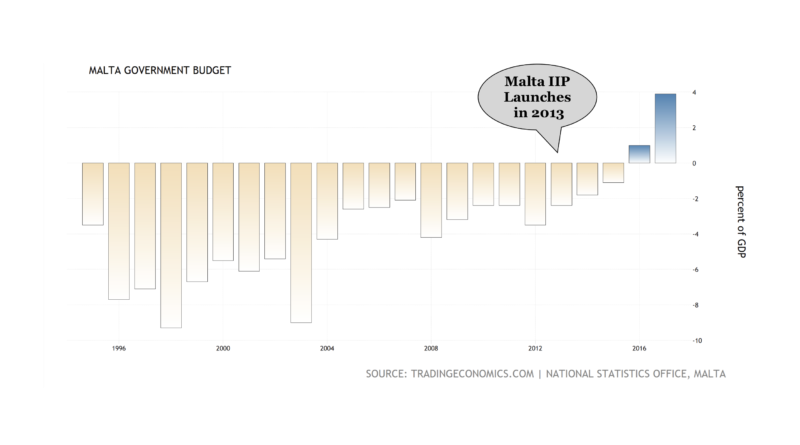 Malta’s budget surplus in 2017 reached €438.6 million, or an astonishing 3.9% of GDP, higher than any other EU country, and fourth highest in the world. In the year from July 2016 to the end of June 2017, the Malta Individual Investor Programme (MIIP) raised €394.1 million (3.72% of GDP). Accounting for 90% of the difference, the island nation’s citizenship by investment program has effectively reversed a deficit trend that’s been in place for as long as statistics have been publicly available.

Last year, Investment Migration Insider reported that in 2016, Malta’s government coffers had swelled thanks to the MIIP, bringing a budget surplus for the first time in decades and a positive balance in the Government’s Consolidated Fund for the first time since the early eighties. In 2017, the country’s economy outdid itself once more.

“Official data for 2017 confirms that, in just four years, we reversed the entire increase in public debt burden made by the previous three administrations,” said Prime Minister Joseph Muscat on Twitter earlier this week.

Malta’s economy, which we’ve previously termed the Mediterranean Tiger, grew by more than 7% in 2017 (in nominal terms) and the European Commission has forecast it will be the fastest-growing economy in Europe in 2018.

As the petty individuals in opposition are witnessing an unprecedented economic golden age in Malta – much of it thanks to the MIIP – and their warnings of the country becoming home to criminal billionaire masterminds have come to naught, by virtue of the tightest CIP-due diligence in the world, they are running out of arguments.

While before the program was launched and had built a track record of success, the opposition could perhaps plausibly admonish it, now, they cannot credibly dispute the program’s merits. Neither on economic grounds nor on national safety concerns.

Perhaps that’s why they’re resorting to name-calling, insinuating that the cowardly murder of a journalist had something to do with the program, shouting allegations in the absence of any evidence of wrongdoing whatsoever, and otherwise grasping at whatever thin straws they can to discredit the program.