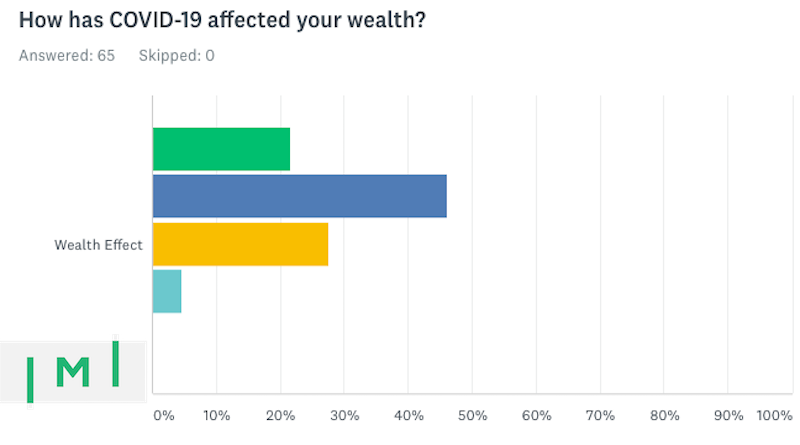 Over the last several weeks, La Vida Golden Visas has conducted a survey among its clients to better understand how the pandemic is affecting their demand for, choice of, and ability to participate in investment migration programs.

While the limited sample size of 65 cannot offer a high degree of statistical accuracy, it nonetheless offers valuable directional insights. Asia, Africa, and the Americas each accounted for about a third of responses, Europeans made up about one in ten, while Middle Eastern investors were under-represented at fewer than 3% of respondents.

In other words, while the pandemic is certainly driving some investors to shelve their migration plans, it’s driving a greater share of them to accelerate such plans. If these responses are representative, they indicate that COVID-19, on the whole, will boost demand for RCBI programs in the months and years ahead.

While the majority of investors had seen their portfolio values shrink as a result of the pandemic, only 22% of respondents said it had caused a big reduction in their wealth, while 47% indicated they had only seen “some reduction” (presumably not enough to derail their investment migration plans). Furthermore, fully one-third of those asked reported either “no real change” or even “some increase” to their capital bases. None of the respondents reported a big increase in wealth (Zoom investors were not surveyed).

Having an interest in and the means to participate in RCBI programs, however, isn’t sufficient to impel an increase in actual application numbers; applicants must also have the ability to gather the documents needed to compile applications.

On this measure, the impact of closed public offices is evident. Some 4 out of 5 respondents said the crisis had made it more difficult to undertake the application process at the moment (12% said it was “impossible”). This will translate into lower application volumes for a wide array of programs in both Q1 (already observed among those countries that have reported such statistics) and Q2 of this year, but that much was expected.

About two-thirds said COVID-19 had affected their choice of program, while the remaining third indicated it had not.

See also: The Virus Will Bring About What The European Commission Couldn’t: Genuine Links

The motivating factors for investment migration also appear to be changing. 54% of respondents said safety and security had become either more or a lot more important as a consideration when picking a program, and nearly as many reported a similar increase in their emphasis on healthcare.

See also: Which RCBI-Countries Have Handled COVID-19 Best So Far?

Overarching themes
While the majority of prospective applicants have seen their purchasing power diminish as a result of the crisis, only a minority have seen a severe reduction. The reduction in wealth, however, appears not to have brought on a commensurate drop in demand for investment migration. Even among those whose portfolios have taken a painful beating, willingness to consider RCBI programs has held up well, as evidenced by the observation that 22% reported a big reduction in wealth while only 11% said they would now be much less likely to apply to a program.

“The results are encouraging and tie in what we are hearing from our clients in day to day calls,” says Paul Williams, CEO of La Vida Golden Visas, the author of the survey. “On balance, investors are more likely to look at RCBI programmes post-COVID-19 with 36.9% saying this was either now “more likely” or a “lot more likely” and just 26.1% of respondents saying it was now less likely. A positive margin that holds out hope for the future.”

Because so many notaries, banks, and other offices where an applicant might need to solicit application documents have been closed (and remain closed, in many areas), most programs will see a drastic reduction in applicant volumes in the short-term. “We are hearing this daily from clients who are struggling to obtain documentation, make bank transfers or travel to view real estate or meet face to face in order to move forward,” says Williams. While Q1 and Q2 figures will seem alarming, there is reason to expect a very strong recovery in Q3 and Q4.

As expected, health and security concerns will move from secondary to primary points of consideration among applicants, a change to which service providers will need to adapt and one to which program policy is already beginning to respond. This new set of motivations, says Williams, “could imply a shift towards residence-based schemes or at least greater ties with the country in question.”

Those who wish to obtain permission to share the survey results or get a more detailed look at the data can contact the authors on covidsurvey@goldenvisas.com.