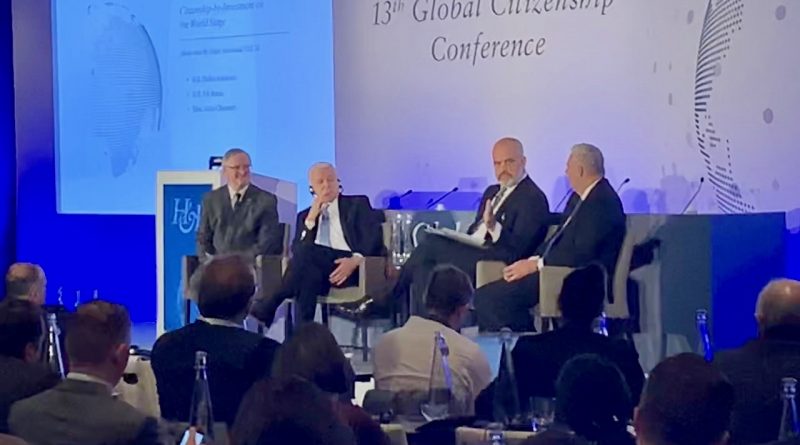 Speaking during a panel session on Wednesday together with his counterparts from Saint Lucia and Montenegro, Albania’s Prime Minister Edi Rama said he “strongly believed” that a citizenship by investment program (CIP) was “the right way and something we have to do”.

The Albanian government, in August this year, announced plans of amending the Law on Citizenship, changes that would also include provisions for granting citizenship to “investors who have a national interest in the country”.

Prime Minister Rama, during the Henley & Partners Global Citizenship Conference in London on Wednesday, indicated that while he recognized CIPs can be controversial, these concerns were outweighed by such programs’ socioeconomic benefits.

“We like to say, in our region, that the grass is always greener on the other side. And this has made us fight for a hundred years,” commented Rama, referring to the armed border conflicts that have sprung up at regular intervals in the Western Balkans since the early 20th century.

“But I have to say that these days, the grass really is greener on their [the Montenegrin] side, even more so now that they have started this program. And we are trying to go the same way as the countries that have created successful models. Now, I know that there are controversies about these programs […] at the same time I strongly believe that this is the right way and this is something we have to do,” affirmed the Prime Minister.

Rama also recognized there would be a certain irony in seeing a country that was formerly closed off from the world open for the naturalizations of third-country nationals.

“Once upon a time, we were proud to be the only country in the world that did not allow anyone to enter…nor anyone to get out,” said Rama to roaring laughter from the room.

He also conceded that Albania had not managed to keep up with the economic development of its regional peers and that a CIP could play an important role in catalyzing a revival.

“For the next 30 years [after the fall of the Communist regime] we had the fastest growth in the region because we came from a very low base and we were a long distance from [neighboring economies]. Now, I think it’s time to go further. So, we embark on this program and we are exploring the possibility to add something to it, not just investing and getting the citizenship but also offering, to the country, know-how and special skills. And this has to be, of course, elaborated,” noted Rama, hinting that Albanian authorities are taking a serious look at the possibility of a CIP but are still in the early stages of planning.

“There are, of course, risks, but we cannot, in the name of risk, deny our country’s future the enormous potential of this kind of program,” concluded the Prime Minister.

Some 10-15 Albanian nationals had also gathered outside the hotel at which the conference took place to stage a protest coinciding with Rama’s attendance. Judging by their placards and statements, however, the protesters did not appear to oppose a CIP as such, but rather the merits of the Prime Minister in general.