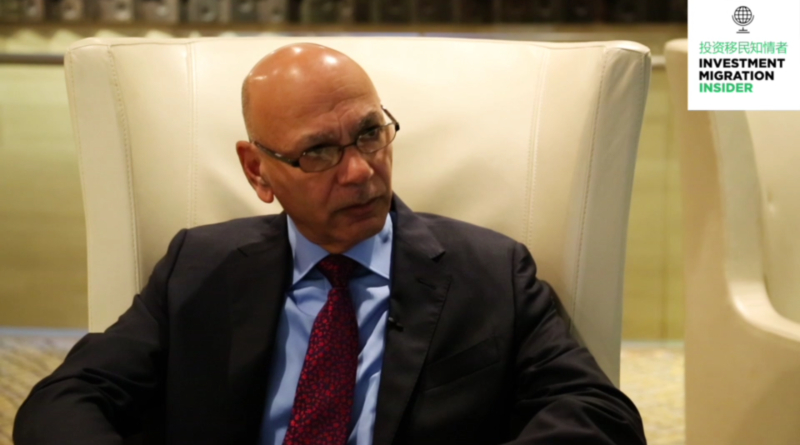 During a recent trip to the Middle East, Les Khan – head of the Saint Kitts & Nevis CIU – fielded questions from international marketing agents as to whether the recently announced Hurricane Relief Fund donation option is legitimate, following a spate of negative press coverage. Khan allayed their concerns, ensuring agents that the Fund is fully legal and constitutional.

Interest in the Saint Kitts & Nevis Citizenship by Investment Programme, says Khan in a press release, has risen markedly since the announcement of the Hurricane Relief Fund option last month.

BASSETERRE, St. Kitts, October 18, 2017 (Press Unit in the Office of the Prime Minister) – The CEO of the Citizenship by Investment Unit (CIU) in St. Kitts and Nevis, Mr. Les Khan, says there has been an increase in the level of interest in all three investment options under the Federation’s Citizenship by Investment (CBI) programme, since the Team Unity Government announced in September the addition of a temporary Hurricane Relief Fund (HRF) option.

Mr. Khan recently returned from a trip to the Middle East, where he actively promoted the Hurricane Relief Fund, as well as the real estate and the Sugar Industry Diversification Foundation (SIDF) options, to international marketing agents and potential clients.

Mr. Khan said, “We have been receiving a lot of interest from various parts of the world, specifically out of the Middle East. We have a number of international marketing agents and regular marketing agents who are promoting our programme, but who felt there were a lot of negative media upon our announcement [of the Hurricane Relief Fund]. So the intention was to allay fears, answer specific questions, and ensure that everyone understood the option that we announced, as well as its legality.”

Funds raised via the Hurricane Relief Fund investment option will help foot the over $150 million bill that the Government of St. Kitts and Nevis faces in regard to rehabilitating key public infrastructure, which suffered damage during the passage of the two category 5 hurricanes – Irma and Maria.

Under the Hurricane Relief Fund initiative, which runs for six months, foreign investors under the CBI programme can make a non-refundable contribution of US$150,000.

During his trip, Mr. Khan met with Mr. Justin Hawley, Consul General at the Consulate of St. Kitts and Nevis in Dubai, who supported him during several meetings with international marketing agents there.

The Chief Executive Officer of the CIU added, “We jointly visited a number of international marketing agents who promote our product. We were very well received, and the information that came back from those visits was that St. Kitts and Nevis is back on the map in terms of a competitive product.”

With regard to the SIDF and Real Estate options, Mr. Khan stated, “It was interesting that we did run into a number of agents who said they were receiving inquiries from individuals interested in our SIDF. There were agents out there who were also of the mistaken opinion that the Hurricane Relief Fund might impact their sale of the real estate option that we have, and again, after discussions and individuals understanding what our product was all about, we felt that this was not the case. There were still applications being received for the real estate option and there will continue to be applications received in real estate.”

Mr. Khan, who was recently appointed as Chairman of the Citizenship by Investment Programmes Association (CIPA), said the success of his trip to the Middle East could also be measured by the signing on of five additional international marketing agents to promote St. Kitts and Nevis’ CBI programme.

“These are agents who, upon seeing the demand for St. Kitts and Nevis, now felt it was an opportune time to register as an international marketing agent. Having this large number of international marketing agents now wanting to sign up with us, I would have to say the demand is still increasing and I am optimistic about the number of files and applications we will get in the next week or two.”

Mr. Khan said every measure is taken to protect the platinum brand of St. Kitts and Nevis’ Citizenship by Investment (CBI) programme, which is one of the world’s longest running and most successful programmes, by employing the most robust due diligence procedures available.